'I am the only coach who has won anything for Chiefs in the last 8 years and you are asking me if my job is under pressure?' said Baxter. 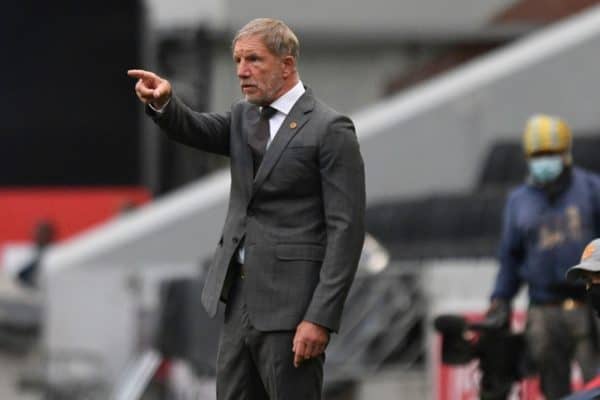 Stuart Baxter has issued a bold riposte to his critics. Picture: Sydney Mahlangu/Backpagepix.

Stuart Baxter has pointed to his trophy haul with Kaizer Chiefs in a staunch defence of his position, after a difficult start to his second spell at Amakhosi.

Amakhosi have won just one of seven games in all competitions, as they prepare to face the coach they fired last season, Gavin Hunt and his Chippa United team at FNB Stadium on Saturday.

Inevitably, in this age of knee-jerk reactions, there have been plenty of calls for the Chiefs coach’s head already, but Baxter’s reaction was full of fire.

“Social media and what people think changes so quickly. I came into the club with no pre-season, we have played six (league) games and you are asking me if my job is under pressure?” said Baxter.

“I am the only coach who has won anything for Chiefs in the last 8 years and you are asking me if my job is under pressure? It is a fast tsunami that can pick up nowadays. Sometimes clubs make good decisions and sometimes they make bad ones. But in the real football world you would think you need to have a bit more time and patience.”

Hunt might have echoed those sentiments when he was fired by Chiefs a few games before the end of last season, having taken Amakhosi into the semifinals of the Caf Champions League, despite a transfer ban, though their position in the DStv Premiership was perilous.

“Gavin Hunt, Stuart Baxter, Ernst Middendorp, every coach we know, every day they are under pressure. And I have sympathy with every coach,” said Baxter when asked if he felt for Hunt.

“Every coach who is relieved of his duties has more to offer. Not everyone is working at Manchester City in a virtual perfect world. In every job there are restrictions, unlucky happenings with injuries, there is the pandemic, the locking of supporters out of stadiums. A coach can be relieved of his duties and can not have done anything wrong.”

Baxter has certainly had his fair share of injuries, particularly in attack, with Samir Nurkovic and Leonard Castro both out for the foreseeable future, while Baxter confirmed that Lebogang Manyama had broken down in training again after only just returning to the side.