“Apparently there have been talks here and there, but not really formal things," said a source close to the AmaZulu midfielder. 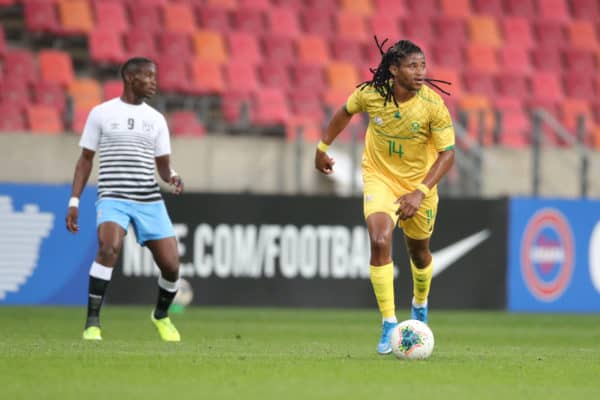 Siyethemba Sithebe (right) has his eyes on a move to Kaizer Chiefs. Picture: Samuel Shivambu/BackpagePix.

A source close to AmaZulu FC midfielder Siyethemba Sithebe has revealed that the dreadlocked player’s wish is to play for his boyhood favourite club Kaizer Chiefs, and if an offer came from the Glamour Boys of Naturena he wouldn’t hesitate, but, having blessings at AmaZulu is also important to him.

Sithebe, who recently shone for Bafana Bafana at the Cosafa Cup in Port Elizabeth, has always dreamt of playing for Amakhosi, according to a source close the player. “Apparently there have been talks here and there, but not really formal things.

“The boy (Sithebe) is a Chiefs fan, he grew up supporting the team and his favourite player was Siphiwe Tshabalala. So, I don’t know if you see where this thing is going, but I think it’s very clear,” the source continued.

“He didn’t make it a secret that he idolises Tshabalala, everybody knows that. He wants to be as successful as Tshabalala and be a good role model as him. Don’t be surprised when you see him being announced at Chiefs,” said the source.

Sithebe played in a Bafana side that won the Cosafa Cup, beating guest side Senegal in the final on penalties. The AmaZulu midfielder did so well in all the matches that he was named Player of the Tournament.

He also had a great season at AmaZulu, helping Benni McCarthy’s side finish 2nd in the DStv Premiership, which qualified them for next season’s Caf Champions League.

Usuthu are likely to be reluctant to let Sithebe go, given his talent and their participation in the continent’s elite club competition.