Man Utd ‘must do better’ despite ending home drought

Victory moves Ole Gunnar Solskjaer's men up to ninth and within seven points of early pace-setters Tottenham with a game in hand. 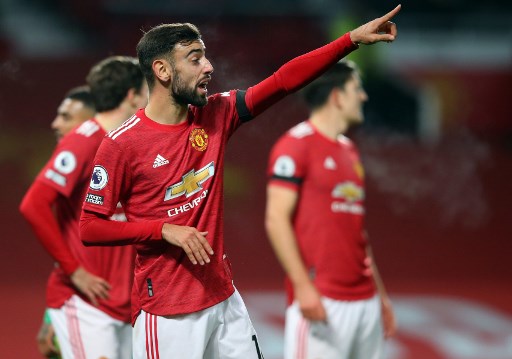 Bruno Fernandes said Manchester United have the quality to do “much better” after his twice-taken penalty saw off lowly West Brom 1-0 to end a run of six games without a Premier League win at Old Trafford.

The Portuguese midfielder got a second chance after Sam Johnstone had saved his first spot-kick, but came off his line in doing so.

United also got a break at the other end moments earlier when a penalty given for a foul by Fernandes on Conor Gallagher was overturned after a VAR review.

“First it was very important to win the game, not because it’s the first win at Old Trafford, but because we need the points,” Fernandes told BT Sport.

Just as in United’s Champions League win at Paris Saint-Germain last month, Fernandes made the most of his reprieve of seeing his first spot-kick saved after the goalkeeper came off his line.

But he was still frustrated at missing a third penalty this season, albeit two were retaken, after a perfect record with his first 10 for United.

“Ok, I scored the second one but I need to score the first one,” added Fernandes.

Victory moves Ole Gunnar Solskjaer’s men up to ninth and within seven points of early pace-setters Tottenham with a game in hand.

However, there was little to appease the unease over where the Red Devils are going under Solskjaer as West Brom threatened to collect their first league win since returning to the top flight.

West Brom have now scored just once in their last six games, but Slaven Bilic was left fuming at the game changing decision not to award his side a penalty early in the second half.

Fernandes looked to have caught Gallagher inside the area when referee David Coote pointed to the spot.

But he infuriated Bilic by overturning the call after reviewing the incident on the pitchside monitor.

“Throughout the whole second half I felt like small West Brom. All those crucial decisions went against us,” said the Croatian.

“The penalty against Gallagher is a clear penalty. The other penalty, with the new rules, it’s handball. But before the handball it was a clear foul on Gallagher.

Even Solskjaer admitted he thought the Baggies’ penalty should have stood.

“There is contact on the ball and the man. In my head it might be a penalty, but maybe the rules are different to how I interpret them,” added Solskjaer.

Moments later Gallagher was denied again, this time by the legs of David de Gea with the biggest chance of the game to that point.

Yet, it was United who were gifted the chance to win the game from the spot when Juan Mata’s cross struck the arm of Darnell Furlong and this time Coote’s decision to award a penalty was not overturned.

Second time round Fernandes smashed home the penalty, but United still had to ride their luck to hold out for the three points.

Callum Robinson was inches away from an equaliser as his dipping shot from outside the area came back off the crossbar.

Defeat leaves the Baggies still rooted in the relegation zone with just three points from their opening eight games.