On this day in LaLiga history -28 January

On this day in 2018, Philippe Coutinho made his LaLiga debut for FC Barcelona in a LaLiga clash against Alaves. 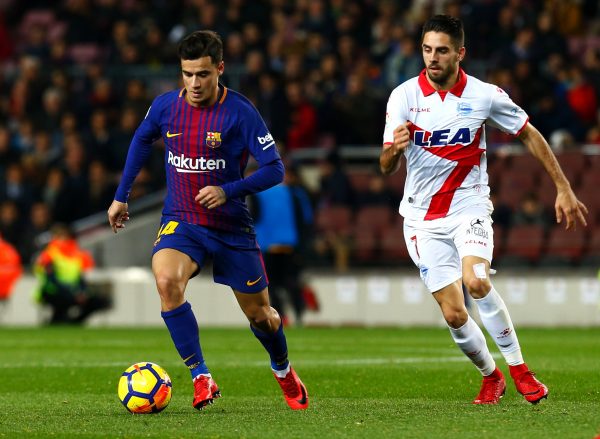 On this day in 2018, Philippe Coutinho made his LaLiga debut for FC Barcelona (Pic: supplied)

There was great expectation at the Camp Nou on 28 January 2018, as FC Barcelona’s big money winter window signing Philippe Coutinho made his LaLiga debut for the blaugrana club.

ALSO READ: On this day in LaLiga history – 27 January

Things did not go exactly to plan from Barça’s perspective, with visitors Alaves taking an early lead through John Guidetti. Positioned on the right wing, Coutinho linked promisingly with new teammates Lionel Messi and Luis Suarez as Barça pressed for an equaliser, and one long ranger seemed set for the net before it was deflected wide.

On 65 minutes the Brazilian was replaced by Paco Alcacer, with coach Ernesto Valverde aware the new signing had recently recovered from a hamstring injury.

Barça did get level with Suarez turning in Andres Iniesta’s cross, and Messi won it late on with a trademark free kick.

Coutinho did not take much longer to make an impact – with seven goals and six assists in the following months as FC Barcelona sealed the 2018-19 LaLiga title.

Meanwhile, on this day in 2013, Lionel Messi scores four goals against Osasuna including a ‘poker’ goal.