Chippa looks for cup and league ‘double’ over City

Chippa United and Polokwane City will face off in an Absa Premiership match at the Nelson Mandela Bay Stadium in Port Elizabeth on Tuesday with kick-off at 7.30pm. 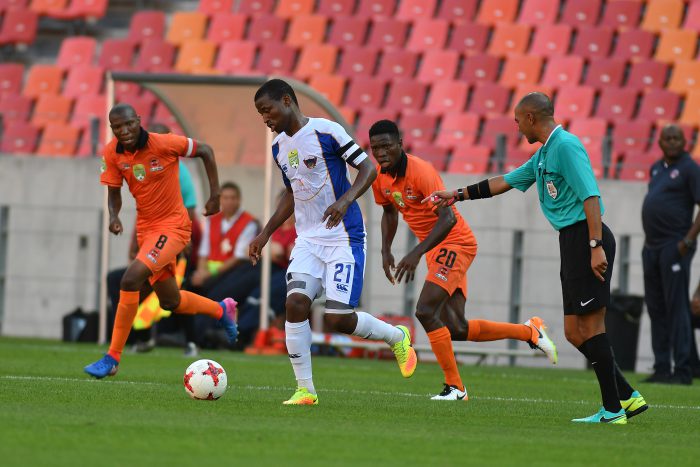 The Chilli Boys brushed aside Rise and Shine 2-0 in the Nedbank Cup last 16 game at the same venue over the weekend.

Man of the Match Buyani Sali opened the scoring in the second half, before Andile Mbeyane snatched a late goal to seal the home side’s victory.

However, Chippa remain winless in seven league matches. The last time they tasted victory in the league was against Baroka FC at home two months ago.

Chippa are placed 10th on the league table with 23 points from 22 matches. They are three points behind eighth-placed Maritzburg United.

Despite his side’s victory over Polokwane, coach Dan Malesela is still not happy with his defence ahead of their clash with the same opposition.

“I think we fought very hard to actually redeem ourselves. But there are still problems, particularly at the back because we had this defence that we have never had before,” Malesela said.

“It’s a good thing we were able to progress to the next level of the competition. It’s another first for us and, hopefully, we will get more.

“But I do not want to jump things. The main focus now is the game on Tuesday because that is the big one.”

Meanwhile, Polokwane, who are wounded, are keen to avenge their recent Cup defeat to Chippa when the two sides lock horns on Tuesday.

Rise and Shine remain winless in nine league matches. Since beating Chippa in a league game at home last December, they have recorded three defeats and six draws.

Polokwane are placed seventh on the league standings with 27 points from 22 matches. They are three points behind sixth-placed Golden Arrows.

Thapelo Tshilo, the Rise and Shine towering defender, is back from suspension, while Puleng Tlolane is likely to start upfront against the Chilli Boys.

Polokwane coach Bernard Molekwa says they have rectified the errors they committed against the Chilli Boys over the weekend.

“It won’t be easy because we played the same team a few days ago. We were just unfortunate on the day,” Molekwa said.

“We created a lot of chances which we failed to convert. I think on the day we played well, but the problem was finishing our chances. But we have gone back to the drawing board.

“We have fixed our mistakes during our training sessions. We are hoping to execute our game plan and win this one.”