Bafana, fielding largely an Under-23 team under coach David Notoane, were 2-0 up at halftime thanks to goals from Luther Singh and Grant Margeman. 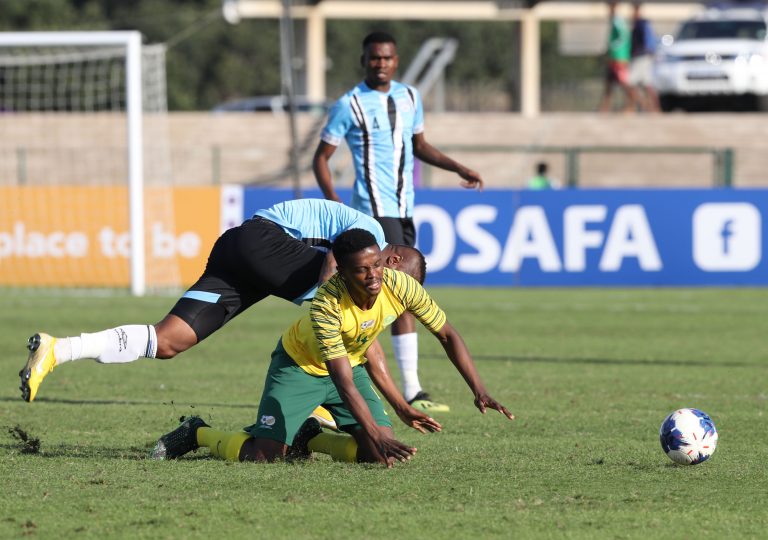 Teboho Mokoena of South Africa challenged by Joel Mogorosi of Botswana during the 2019 Cosafa Cup match between South Africa and Botswana at Princess Magogo Stadium, Durban on 02 June 2019 ©Samuel Shivambu/BackpagePix

Botswana came from two goals down at the Princess Magogo Stadium on Sunday afternoon to secure a 2-2 draw with South Africa before winning 5-4 on penalties, setting up a Cosafa Cup semi-final date with Lesotho.

Bafana, fielding largely an Under-23 team under coach David Notoane, were 2-0 up at halftime thanks to goals from Luther Singh and Grant Margeman.

But Botswana pulled a goal back on the hour mark through Lebogang Ditsele before Thatayaone Ditlhokwe equalised 20 seconds before the final whistle to send the tie straight to penalties.

Bafana scored their first four spot kicks, but Tebogo Mokoena’s penalty was saved by Ezekiel Morake, which proved the difference.

The hosts were in control of the first half and they went in front after 18 minutes when Man-of-the-Match Mokoena played a defence-splitting pass for Singh, who composed himself superbly with a couple of touches before passing the ball into the back of the net.

Head coach of Bafana Bafana Stuart Baxter has said that places for the 2019 Africa Cup of Nations squad are still up for grabs, and the Portugal-based Singh seemed determined to stake his claim as he came close to scoring with a well-executed free kick four minutes later, but was denied by a brilliant fingertip save from Morake.

The second goal wasn’t long in coming however as Kamohelo Mahlatsi cleverly set up Margeman, who rifled in a clinical angled drive from just outside the big box to make it 2-0 with 27 minutes played.

Bafana keeper Reyaad Pieterse, the only player older than 22 in the South African side, made his first telling contribution of the opening half when he reacted sharply to palm the ball over the bar following a close-range 34th-minute header by veteran Botswana forward Joel Mogorosi.

Pieterse was again called into action two minutes later and did well to save at the near post after Thero Setsile had stormed 30 metres down the field before firing in a crisp shot.

After what had been an evenly-balanced opening 15 minutes of the second stanza, Botswana got themselves back in the game when Ditsele rose powerfully to head in a corner.

The Zebras, however, were unable to keep the pressure on the home team, and when the next real goalmouth action came it was only in the 86th minute when a Singh free- kick was again brilliantly tipped over the crossbar by Morake.

However, there was a late twist to the tale as Bafana were found wanting at a 93rd-minute corner kick from which Ditlhokwe headed in to send the match to penalties.

Botswana’s semifinal against Lesotho will take place at the Moses Mabhida Stadium at 5pm on Wednesday evening.

The second semifinal will be between Zimbabwe and the winner of the Zambia / Malawi quarterfinal.