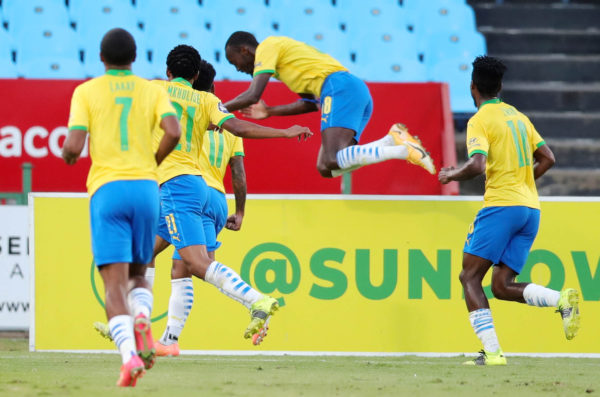 After knocking on the door countless times, Peter Shalulile finally got the breakthrough for the Mamelodi Sundowns in a 2-1 win at the backyard of TP Mazembe after the hour mark to help Sundowns win all three points and maintain a 100% start to their group action.

Shalulile did well to beat what was a tight offside trap by the hosts’ rear guard, as he managed to stay onside and was found by Themba Zwane in around the goal-mouth area to net his 11th goal of the season in all competitions and his third in the Caf Champions League.

Moments later, Mazembe came close to find the equaliser through Miche Mika, who released a stinging shot from range, beating Masandawana goalkeeper Denis Onyango but was unlucky to find the woodwork instead of the back of the net.

Approaching the last 15 minutes of the game, the Sundowns bench decided to reinforce their defence and brought on Rushine De Reuck in the place of Zwane, adding to the defensive line-up of Mosa Lebusa, Ricardo Nascimento and Rivaldo Coetzee.

However, Mazembe managed to navigate through that reinforced defence and found the equaliser through veteran striker Tresor Mputu in the 82nd minute.

That goal meant Mazembe’s goal-scoring struggles in the continental competition came to an end as they had, before this encounter, uncharacteristically gone two games without hitting the back of the net and they find themselves tied on two points with CF Belouizdad of Algeria and Sudanese side Al-Hilal. Those sides played to a 1-1 draw on Friday night, allowing Sundowns to take the total lead of the group.

Sundowns had the last say through the left foot of Lyle Lakay, who scored a sublime free-kick in stoppage time to make sure that the one-time African champions returned to South Africa with maximum points.