Neymar set to return for PSG in ‘special game’ for Pochettino

The world's most expensive player has not played since being stretchered off with an ankle injury at the end of PSG's Ligue 1 defeat to Lyon on December 13. 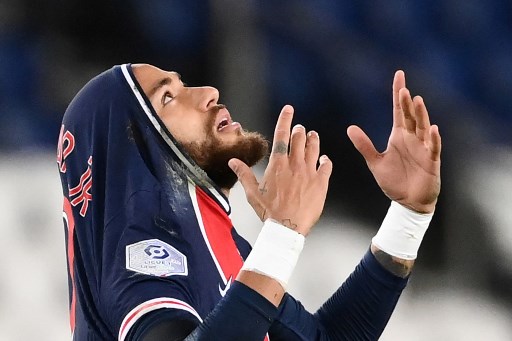 (FILES) In this file photo taken on October 24, 2020 Paris Saint-Germain's Brazilian forward Neymar reacts during the French L1 football match between Paris Saint-Germain (PSG) and Dijon at the Parc de Princes stadium in Paris. - Barcelona will sue Neymar for 10.2 million euros ($12 million) that they believe to have overpaid the Brazilian footballer during his time at the club, according to a report in El Mundo newspaper today. (Photo by FRANCK FIFE / AFP)

Neymar is in line to return for Paris Saint-Germain after four weeks on the sidelines in Wednesday’s Champions Trophy game against bitter rivals Marseille.

“Neymar is available and will be in the squad. We will decide tomorrow (Wednesday) if he plays or starts on the bench,” PSG coach Mauricio Pochettino said at a virtual press conference ahead of the game.

The world’s most expensive player has not played since being stretchered off with an ankle injury at the end of PSG’s Ligue 1 defeat to Lyon on December 13, missing his side’s last five matches as a result.

Neymar was one of three PSG players sent off in an ugly ending to PSG’s most recent meeting with Marseille, who finished with nine men.

The Brazilian later accused Marseille defender Alvaro Gonzalez of racism, although in the end no action was taken due to a lack of evidence.

Wednesday’s game is just PSG’s third since former Tottenham Hotspur coach Pochettino was appointed as the successor to the sacked Thomas Tuchel, and offers the chance for him to win his first piece of silverware with the Qatar-owned club.

The Champions Trophy is the French equivalent of a Super Cup, usually contested at the start of the season by the league champions and French Cup winners. With PSG winning both last season, Marseille have been selected as their opponents as the Ligue 1 runners-up.

Played overseas in the last 10 years, including most recently in China, this season’s edition was delayed because of the coronavirus pandemic and is taking place in less exotic conditions behind closed doors in Lens in northern France.

Nevertheless Pochettino, who played for PSG, called it a “special match, but winning the game almost matters more than winning a trophy at the end of it”.

His first game at the helm ended in a 1-1 draw with Saint-Etienne last week, before he oversaw a first win as PSG beat Brest 3-0 on Saturday to leave them a point behind Ligue 1 leaders Lyon at the campaign’s halfway stage.

While Neymar returns, young full-back Colin Dagba on Tuesday became the latest Paris player to test positive for Covid-19 and has joined team-mates Rafinha and Thilo Kehrer in having to isolate.

Marseille, coached by Andre Villas-Boas, beat PSG 1-0 in that last, fiery meeting in the league in September, their first win over their greatest rivals in nine years.

“Andre and I both coached Tottenham. I have great affection for him and we get on well with each other,” Pochettino said of his opposite number.