Sundowns failed to open a bigger gap between themselves and second-placed Swallows FC when they were held to a goalless draw by Celtic. 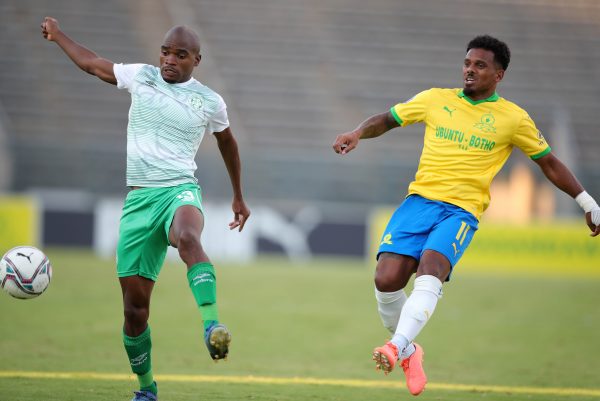 Bloemfontein Celtic goalkeeper Jackson Mabokgwane was hoping to celebrate his 33rd birthday with a win and a clean sheet against defending champions Mamelodi Sundowns, of which he did.

But it was not entirely his sole effort, as they managed to hold Sundowns to a goalless draw on Tuesday evening at the Lucas Moripe Stadium.

The responsibility in between the sticks was shared by goalkeeper Mabokgwane and Sipho Chaine, who came on for his teammate about five minutes after the start of the second stanza. Mabokgwane was struggling with his left shoulder after picking up a knock earlier.

Chaine’s immediate call to action was from a Sundowns set-play when George Maluleka delivered a free-kick that ended up getting striker Peter Shalulile into trouble. Referee Thokozani Mkhize ruled that the energetic Shalulile was guilty of trying to score in Diego Maradona fashion as he made use of his hand to help the ball into the back of net – a foul play better known as “the hand of God”.

A couple of minutes later, Kermit Erasmus almost got his name onto the score-sheet when he unleashed a powerful shot that had Chaine well beaten, but the crossbar came to the aid of the Siwelele goal-minder.

In the opposite end, Denis Onyango was called into action by Sera Motebang who almost scored a beauty of a bicycle-kick – also known as a Bebeto – but Onyango was on high alert and tipped the ball over the bar.

The run of play was then tilted towards Chaine’s goal and Erasmus was once again at the end of a Masandawana attack.

Erasmus did everything right to beat his markers and he showed some skills, turning defenders inside out with some ‘show me your number’ and a ‘shibobo’, but bhis time around Chaine did not need the crossbar to come to his rescue as he stretched to affect a save.

Sundowns’ coaching trio of co-head coaches Manqoba Mngqithi and Rhulani Mokwena together with senior coach Steve Komphela, decided they had seen enough of star-player Themba Zwane, who did not do much in the game, and introduced Lesedi Kapinga in his place, while Gaston Sirino and Aubrey Modiba were also introduced in the places of Mothobi Mvala and Tebogo Lanagerman. Their efforts did not amount to much as they could not help the Brazilians win maximum points.