"Black Leopards and their head coach Dylan Kerr have reached an agreement to part ways amicably," read a statement posted on the club's official Twitter account. 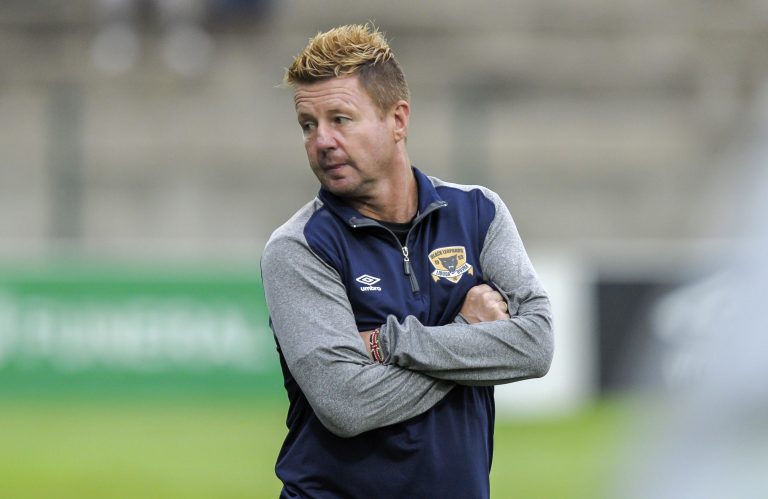 Black Leopards have parted ways with their coach, Dylan Kerr, two games after he guided the side to an unpredictable and still unbelievable 2-0 win over Orlando Pirates just over a week ago.

Kerr must have failed to contain his and his players’ excitement after the big Pirates win as the side went on to lose their next two games, conceding five goals without reply in the process.

After the Bucs win, Lidoda Duvha lost 2-0 to Cape Town City in the next game and got a 3-0 thrashing in the hands of Chippa United at the weekend, sealing the British mentor’s fate.

In their past five games, Lidoda Duvha lost one, drew one and lost three, earning just four points off a possible 15.

“Black Leopards and their head coach Dylan Kerr have reached an agreement to part ways amicably,” read a statement posted on the club’s official Twitter account.

Kerr’s former assistants will be in charge of the team in the meanwhile, confirmed the statement.

“Assistant coaches, Morgan Shivambu and Lehlohonolo Seema together with goalkeeper coach, Sam Banda will be responsible for the team in the meanwhile.”

The trio will face a stern test as their first job will be to come up with a strategy to avert a third straight defeat when they come up against Mamelodi Sundowns at Thohoyandou Stadium on Wednesday at 5pm. Leopards remain 15th in the DStv Premiership standings with just nine points from 12 games.

Lidoda Duvha have terminated the contract of Madagascan midfielder Aro Hasina Adrianarimanana, better known as Dax in football circles, and he is now a free agent.