Swallows and SuperSport give Sundowns breathing space after stalemate

While most television sets were tuned into the Soweto derby between Orlando Pirates and Kaizer Chiefs, SuperSport United and Swallows FC had their eyes fixed on the top of the DStv Premiership, looking to keep up the pace with defending champions Mamelodi Sundowns. 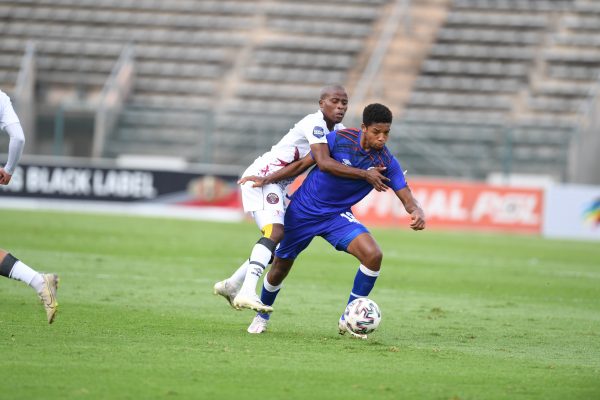 In the end, the sides played to a 1-1 draw at the Lucas Moripe Stadium, giving Masandawana an opportunity to stretch their lead to five points on Sunday afternoon when they took on Chippa United. The affair between The Spartans and Dube Birds was a classic example of the age-old phrase that says “it was a game of two halves”.

Lucky Mohomi scored his maiden goal for Matsatsantsa A Pitori in the first half, in a goal that not only gave the hosts the lead, but was the side’s 1000th league goal under the Premier Soccer League era. Mohomi took his shot from miles out and on its way, the ball deflected on Vuyo Mere and caught goalkeeper Virgil Vries flat footed.

However, Swallows dominated most of the first stanza even though they were unlucky in front of goal. Most of their chances fell to skipper Lebohang “Cheeseboy” Mokoena who could not beat Ronwen Williams who remained resolute and made himself big in front of goal.

The SuperSport captain, Williams, was celebrating another milestone, starting his 100th consecutive game for Matsatsantsa. The first of his centenary games traces back from a goalless draw at home to Maritzburg United, on March 3, 2018.

Williams was eventually beaten by Joseph Mhlongo, coming off the bench to find the equaliser in the 75th minute. United were caught unawares with a quick free-kick, that saw substitute Kamohelo Mahlatsi coming back to haunt his former side. Mahlatsi, otherwise known as the venomous drug, “Nyaope”, delivered the assist, finding Mhlongo on his bike with a pacey ball across the defence.

The Birds’ next assignment in the league will be hosting Benni McCarthy’s resurgent AmaZulu outfit, while Kaitano Tembo’s men will face a tricky Bloemfontein Celtic.