Hussein El-Shahat and Mahmoud Kahraba will miss their side’s game on Thursday. 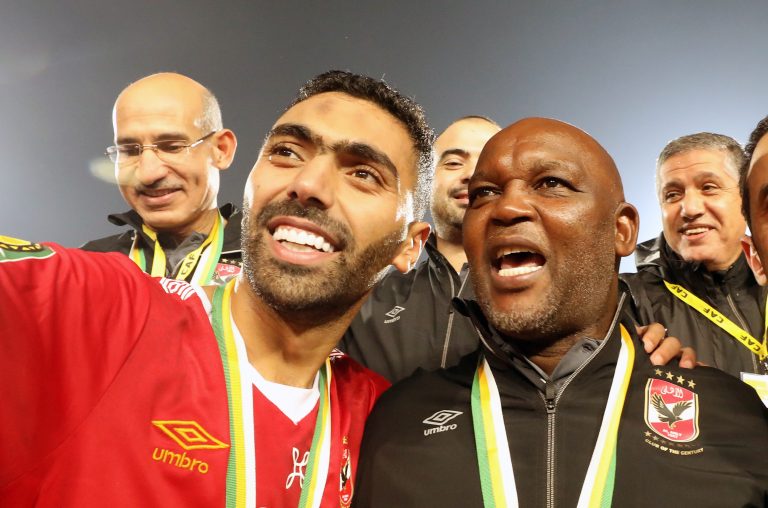 Al-Ahly player Hussein El Shahat (L) has been suspended for thir game against Palmeiras and head coach Pitso Mosimane (R) will have to field another player in his place. Picture: EPA/KHALED ELFIQI.

Al Ahly coach Pitso Mosimane will be without two of his star players when his side takes on Palmeiras in a third-place playoff match for the bronze medal.

Hussein El-Shahat and Mahmoud Kahraba will miss their side’s game on Thursday.

Mosimane’s side lost 2-0 in the semi-final of the Fifa Club World Cup to German side Bayern Munich. Polish star Robert Lewandowski scored a brace to secure a place in the final for his side.

After the game El-Shahat and Kahraba made their way to the stands to greet the Red Devils legend Mohamed Aboutrika. The duo were spotted shaking hands with Aboutrika.

Fifa noted the exchange between the duo and Aboutrika, confirming a day before the third-place game that they have been relegated to the stands for the match against the Copa Libertadores champions.

Fifa informed the Red Devils on Tuesday that El-Shahat and Kahraba “have not adhered to precautionary measures,” in a statement and have been suspended for the club’s next match in the world club tournament.

El-Shahat scored one goal against Al-Duhail in the tournament which saw Mosimane’s side advance to the next stage, while Kahraba was a standout player in their game against Bayern but their joy short-lived after they conceded two-goal against the German giants.

The Al Ahly duo were sent to do a nasal swab after the handshake by the organising committee. The Egyptian giants hoped to resolve the matter before their game on Thursday afternoon.

Mosimane will hope to help his side pick up their second bronze medal in the Fifa World Cup, with the first one coming in 2006.