Celtic lost Mabena just before half-time, and went on to lose the match 1-0 to Bucs at the Orlando Stadium on Tuesday. 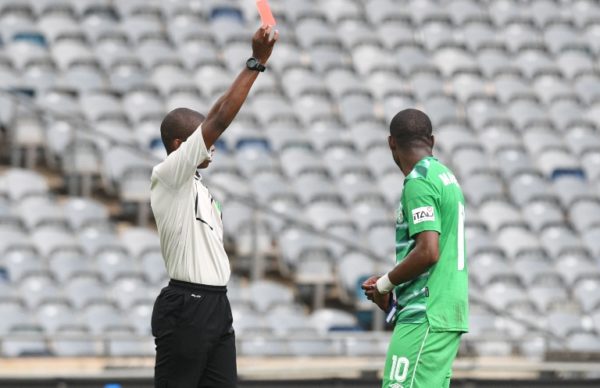 Ndumiso Mabena of Bloemfontein Celtic and other players are set to give the Free State Club a red card. Picture: Sydney Mahlangu/BackpagePix.

Bloemfontein Celtic coach John Maduka says Ndumiso Mabena’s red card forced him to alter his team, but he is impressed with his charges response, especially in the second half against Orlando Pirates.

Celtic lost Mabena just before half-time, and went on to lose the match 1-0 to Bucs at the Orlando Stadium on Tuesday.

With the way things unfolded, the Phunya Sele Sele coach says there was at least something he learnt from the game.

“Look, second half we had to change everything. We had nine men, 10 with the goalkeeper so we had to try everything. There are so many things you learn in this game, you learn while the game is even playing. We had to make sure that we still keep the balance. The game was 0-0 so we had to make sure we defend as a team whenever we lose possession because we were a man down. Again, immediately with the ball when we had to go forward we had to rely on the wing-backs to give us balance when going forward,” said Maduka.

“There was so much to learn, but I think the boys played well. We looked so much dangerous in the second half. I think it’s the second time we played Pirates with 10 men, it was the same thing in the final (MTN8). It’s something that can happen in any other game, players can be sent off and it’s something that you should be able to deal with.”

The loss was Celtic’s eighth of the season, with the Free State club having recorded six draws and four wins.

In their last four league games, they have lost two matches, played to a draw and won one.

Maduka’s troops find themselves sitting in position 11th on the league standings with 18 points.

They will be looking to make things right when they host relegation threatened Maritzburg United in Saturday.

The Team of Choice have been struggling this campaign, but their recent 1-0 win over Black Leopards will be a huge motivation going into the Phunya Sele Sele clash.