Spain through to Euro 2020 semi-finals on penalties

European champions in 2008 and 2012, Spain beat Switzerland 3-1 on penalties after their quarter-final tie in Saint Petersburg. 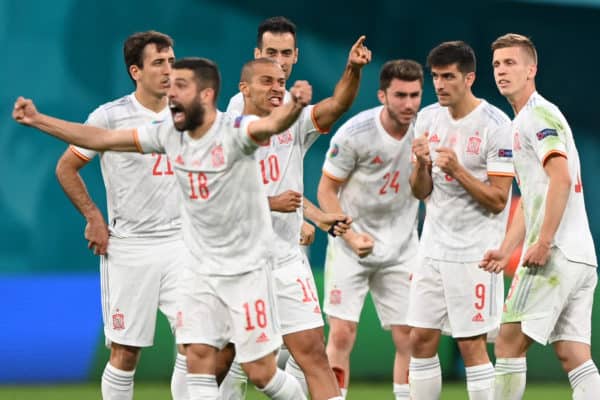 Spain needed penalties to get the better of Switzerland and advance to the semi-finals of Euro 2020 on Friday, setting up a clash against Belgium or Italy who were playing each other later in Munich.

European champions in 2008 and 2012, Spain beat Switzerland 3-1 on penalties after their quarter-final tie in Saint Petersburg finished 1-1 at the end of extra time, with Mikel Oyarzabal scoring the winning kick.

Earlier Luis Enrique’s side appeared to be coasting as Jordi Alba’s shot deflected in off Denis Zakaria for an own goal to put Spain ahead in the eighth minute.

However, the Swiss had caused a sensation by eliminating world champions France in the Euro 2020 last 16 and they battled back to equalise midway through the second half when a disastrous defensive mix-up between Spain centre-backs Aymeric Laporte and Pau Torres allowed Xherdan Shaqiri to score.

Switzerland then held on through extra time after midfielder Remo Freuler was sent off in the 77th minute for a challenge on Gerard Moreno.

They had converted all five of their penalties in the shoot-out against France and this time they were given a head-start when Sergio Busquets hit the post with Spain’s first effort.

Rodri also failed to score for Spain but Unai Simon saved from Fabian Schaer and Manuel Akanji before Ruben Vargas blazed over.

Oyarzabal’s kick allowed Spain to go through and help banish the memory of their defeat on penalties in the Euro 2020 last 16 of the 2018 World Cup against the hosts in Russia.

Friday’s game went ahead in Saint Petersburg despite major concerns about a surge in coronavirus cases in the Russian city, fuelled by the Delta variant.

Earlier on Friday, Russia reported 679 coronavirus deaths over the previous 24 hours, setting a pandemic high of fatalities for the fourth day in a row. Saint Petersburg recorded 101 deaths.

An attendance of almost 25,000 watched the game in the Krestovsky Stadium, which has welcomed some of the largest crowds permitted at this pandemic-affected European Championship.

Spain now advance to a Euro 2020 four tie in London next Tuesday against Belgium or Italy.

The remaining quarter-finals will be played on Saturday, when England — fresh from beating Germany — play Ukraine in Rome.

England may not have many fans in the Stadio Olimpico due to Italian coronavirus rules which mean all arrivals from the United Kingdom have to quarantine for five days.

Denmark play the Czech Republic in Baku exactly three weeks on from Christian Eriksen’s cardiac arrest in the Danes’ first match at the tournament.

Eriksen was discharged from hospital less than a week after his collapse after having a defibrillator implanted to regulate his heart rate, and without him Kasper Hjulmand’s team have rallied to reach the last eight.

“We will play with the heart of Christian Eriksen. He is the heart of the team still and with that heart and without fear, we will try,” said Hjulmand.