Both England and Italy have star names who could sway the final in their favour.

The battle between Harry Kane and Giorgio Chiellini could be one of the keys to who wins Euro 2020. Picture: Ettore FERRARI / AFP.

The Euro 2020 final between Italy and England on Sunday at Wembley is widely expected to be a close match decided by fine margins.

Here, AFP Sport takes a look at five key battles on the pitch which could swing the game in one team’s favour:

Neither Kane nor Chiellini have enjoyed smooth rides through the tournament, but both will be crucial to their side’s hopes of winning the trophy.

England captain Kane was the top scorer in qualifying, but surprisingly looked out of sorts as he failed to score in the group stage.

But the Tottenham striker, who won the Golden Boot at the 2018 World Cup, has since bounced back with four goals in three knockout matches to lead England into their first major tournament final for 55 years.

Veteran centre-back Chiellini hobbled off in the first half of Italy’s second Group A game against Switzerland and did not return until the quarter-final victory over Belgium.

But the Azzurri skipper, alongside fellow Juventus defender Leonardo Bonucci, has played a big part in helping Italy withstand onslaughts from both Belgium and Spain in the semi-finals.

Manchester City winger Sterling has been the driving force behind England’s run, scoring winners against both Croatia and the Czech Republic in the group stage before netting the opening goal in the 2-0 last-16 victory over Germany.

He also ran a tired Denmark ragged in the semi-finals, having set up Kane’s opener against Ukraine in the quarters, and won the match-winning spot-kick.

Di Lorenzo will likely be the man tasked with stopping Sterling on Sunday.

The Napoli right-back has enjoyed a solid Euro 2020, but struggled at times against the pace of Jeremy Doku against Belgium, conceding a penalty for a needless foul on the teenager.

Jorginho has been the heartbeat of the Italy midfield and one of the reasons behind a tactical shift which has seen Roberto Mancini’s men enjoy more possession than previous Italian teams.

The Champions League winner was not as dominant in the semi-final against Spain, though, with Barcelona’s teenage sensation Pedri shining in midfield.

Only Chelsea star Jorginho and Pedri have covered more ground in the tournament than Phillips, coached by the famously demanding Marcelo Bielsa at Leeds.

England will be hoping Phillips can put his energy to good use and nullify the influence of Jorginho, as he did to Luka Modric for long spells of their opening match against Croatia.

Two of the tournament’s star players will go head-to-head on Italy’s right wing.

Juventus youngster Chiesa has tormented defences with his pace and skill, scoring brilliant goals against Austria and Spain.

Left-back Luke Shaw will be the man tasked with stopping him, but the Manchester United defender has been an attacking threat too, making three assists.

Both teams will be hoping that their man in this duel can keep the other occupied defensively, rather than being left free to run into space.

Italy’s front man Immobile has not fired on all cylinders so far at Euro 2020, but has still netted twice and has a brilliant goalscoring record for Lazio.

But he will have to be at his best to cause Maguire problems, with the England centre-back having impressed in every match since coming back from injury for the final group game.

Immobile may also be tasked with pressing Maguire to prevent him from playing the forward passes that have often launched England attacks since he returned to the team. 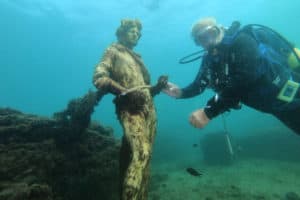 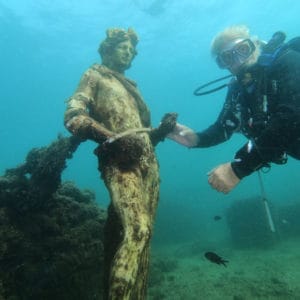 WATCH: Diving among ancient ruins where Romans used to party
4 weeks ago
4 weeks ago

WATCH: Diving among ancient ruins where Romans used to party
4 weeks ago
4 weeks ago