Orlando Pirates' quest to bag three points against SuperSport United to cement their place in the top-eight race is not the only reason why the match is vital for Eric Tinkler, as he reckons it will put them in a right mind-set with the same teams set to do battle in the final of the Nedbank Cup a week later. 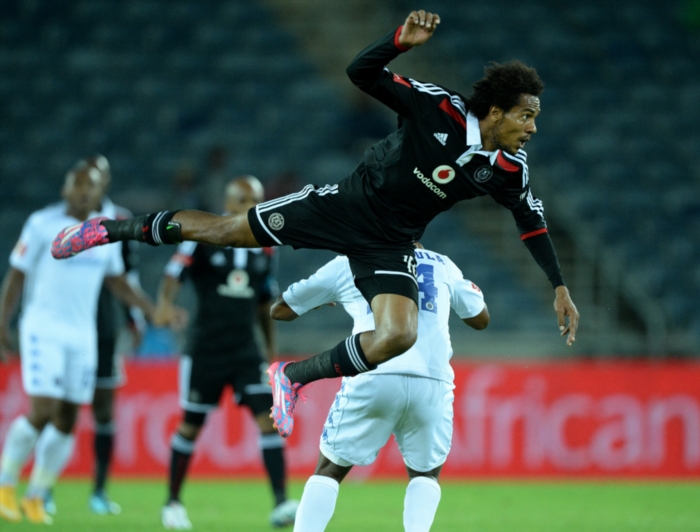 Issa Sarr of Pirates dives to win the header during the Absa Premiership match between Orlando Pirates and SuperSport United at Orlando Stadium on April 29, 2015 in Soweto, South Africa. (Photo by Duif du Toit/Gallo Images)

“We will have to play our natural attacking game because it is important that we win this encounter,” Tinkler told the club’s website.

“It is no secret that whoever wins this final league match will go into the final of the Nedbank Cup the more confident of the two sides, which makes it vitally important for us to get a win.”

The Buccaneers welcome Matsatsantsa a Pitori at the Orlando Stadium today, before ending the season at the Peter Mokaba Stadium.

The Pirates mentor believes the match will be tightly contested and the Pretoria outfit will be looking to get maximum points to make sure they will be playing in the MTN8 next season.
However, Pirates have the same mandate and Tinkler adds that they will have to match their opponents for effort to win the tie.

“I expect a tough game from SuperSport United. They will come here looking for a win because the only way they can get to finish in the top-eight is if they get all three points, which in a way makes this match a final before the final.”

“It’s going to be a hard fought battle for a top-eight finish. We are sitting in seventh at present and they are two positions below us. It is obvious that they will want to get the three points on offer in order to sneak into the top-eight. We, on the other hand, will obviously have to match them for effort in order to ensure that the result goes in our favour and cements our top-eight position.”