Royal Eagles have sacked their coach Allan Freese following a dismal start to the National First Division campaign where the team have failed to register a win in four games. 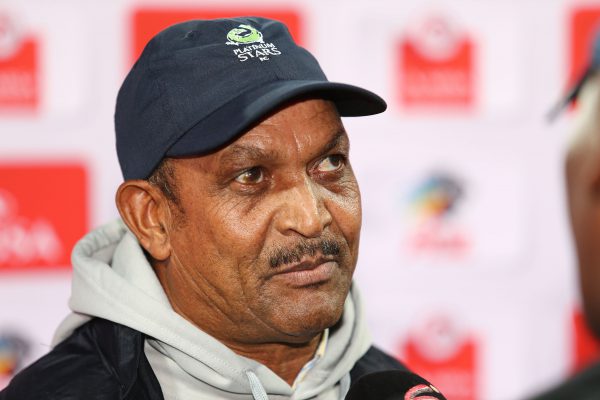 Phakaaathi has learnt that the team are looking to bring in either Dan “Dance” Malisela or Vladislav Heric to take over. Malesela was recently sacked at Chippa United while Heric is Ajax Cape Town’s reserve team coach.

“I heard Mpisane is considering his options but the two are firm favourites for the job,” said a source.

Meanwhile, Super Eagles assistant coach Lebogang Mothibantwa has told Phakaaathi that their difficult start was due to a goalkeeping crisis in the team.

“We lost our main keeper to an injury in our first game and we had to bring in a youngster who I think was overwhelmed by the occasion. Our regular keeper has since come back and we have drawn and won and we believe things are coming together,” said the former Orlando Pirates player.

CT All Stars 1 (R. Gamaldien, 43’) – Mbombela United 3 (S. Zwane, 53’; T. Liphoko, 81’, 90’)
A dramatic second half come-back by Mbombela United denied Igugu leKapa their fourth win of the season but David Kannemeyer’s team remain second on the standings following an impressive start to their season. Tshepo Liphoko was the hero after converting a penalty and completing his brace right at the death.

Jomo Cosmos 1 (S. Mkhize, 5’) – Richards Bay FC 0
Ezenkosi had to fight hard to secure their second win of the season as the Rich Boys gave them some scary moments. Sicelo Mkhize score early on and had a penalty appeal denied. Roger Sikhakhane’s team are remain rooted to the bottom while Ezenkosi are back in contention for the title.

University of Pretoria 2 (I. Chikohwa, 83’, 90’) – Royal Eagles 1 (B. Komane, 26’)
A late brace by Zimbabwean striker Ian Chikohwa sunk Royal Eagles who fell to their second defeat of the season and led to the sacking of coach Allen Freese.
Eagles had taken the lead in the first half when Boikanyo Komane converted a penalty. Eagles are second from bottom while AmaTuks moved up to third.

Mthatha Bucks 1 (M. Erasmus, 88’) – Witbank Spurs (H. Khoza, 89’)
Amathol’amnyama could had not even finished celebrating their goal which they hoped would ensure full points when Siyavutha equalised a minute later. Bucks must have thought they had the three points in the bag when NFD’s leading marksman Mpho Erusmus scored with two minutes to the end, but Humphrey Khoza ensured the share of the spoils a minute later.

Stellenbosch 2 (A. Mosiathlaga, 20’; K Masia, 40’og) – Black Leopards 1 (M. Munyai, 55’)
Stellies jumped to the top of the standings following a 2-1 win over Black leopards. Abednigo Mosithlaga put the home side ahead 20 minutes into the match while an own goal by Khomotso Masia increased the lead to 2-0. Marks Munyai found one back for Lidoda Duvha early in the second half but it was not to be.

Real Kings 1 (S. Bhengu, 44’) – Ubuntu Cape Town 1 (R. Chivaviro, 65’)
A goal in each half saw the match end in a 1-1 draw which left either coach unimpressed as they felt they could have collected the full points. Surprise Bhengu opened the scoring a minute before half time but Range Chivaviro cancelled it out in the 65th minute.

Super Eagles 2 (M. Mokoena 24’; S. Lepele 51’) – Uthongathi FC 0
A goal in each half ensured that Eagles continued their steady rise up the standings. Modibedi Mokoena opened the scoring in the 24th minute while Senokoane Lepele added his name on the score sheet in the second half. Eagles are now on four points after four matches.