TKO the start of something big for Pirates – Maela

Orlando Pirates leftback Innocent Maela says the Telkom Knockout competition is an opportunity for them to show how determined the club is to win trophies this season. 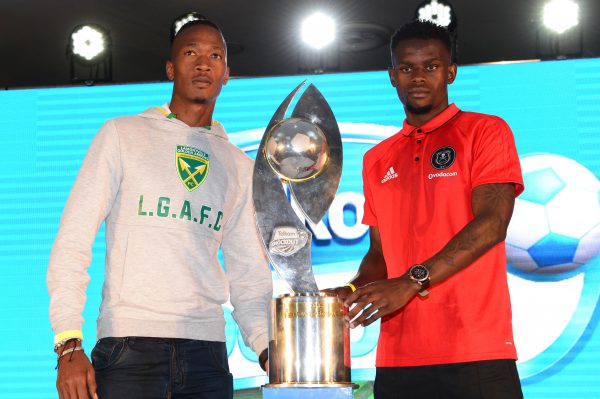 Matome Mathiane of Golden Arrows and Innocent Maela of Orlando Pirates during the Telkom Knockout 2017 Launch at The Wanderers Club. (Photo by Lee Warren/Gallo Images)

The Buccaneers have been drawn to play their last-16 match away from home against Golden Arrows.

“This is a chance for us to make things right,” said Maela following the draw held in Johannesburg on Monday. “We all know what happened in the last two seasons, but this is a totally different season and we are all determined to bring the club to its best.

“Pirates are a big club and the supporters expect us to win every available trophy, so we have to fight and ensure we give them what they want so they can be happy,” he said.

READ: Chiefs and Pirates avoid each other in TKO draw

Maela has been one of the key players in the back four this season after coming back from his loan spell with Thanda Royal Zulu. The leftback says despite many changes that occurred at the club this season, things are going very well and everyone wants to help the club be successful.

“It’s like that at every team ahead of a fresh season. But we are really good and have adjusted well together. We have a good technical team that helps us prepare well for games and everyone at the club just wants to see the team doing great this season.”

Defending champions Cape Town City, meanwhile, will kick-start their journey to defend the trophy with an away clash in Limpopo against high-flying Baroka FC.

City midfielder Aubrey Ngoma, who was the competition’s Player-of-the-Tournament last season, says they are looking to retain their title, but playing Baroka will be difficult with the club having started the season so well.

“We are definitely looking to defend out title, but we know it won’t be easy. Baroka have been doing well and are on top of the Premiership at the moment. It won’t be an easy fixture, but we will go out there and make sure we win,” said Ngoma.