Hapless Pirates held to a draw at home by Arrows

Orlando Pirates gave an indifferent performance that lacked precision as they were held to a 0-0 draw by Golden Arrows at Olrando Stadium on Wednesday night. 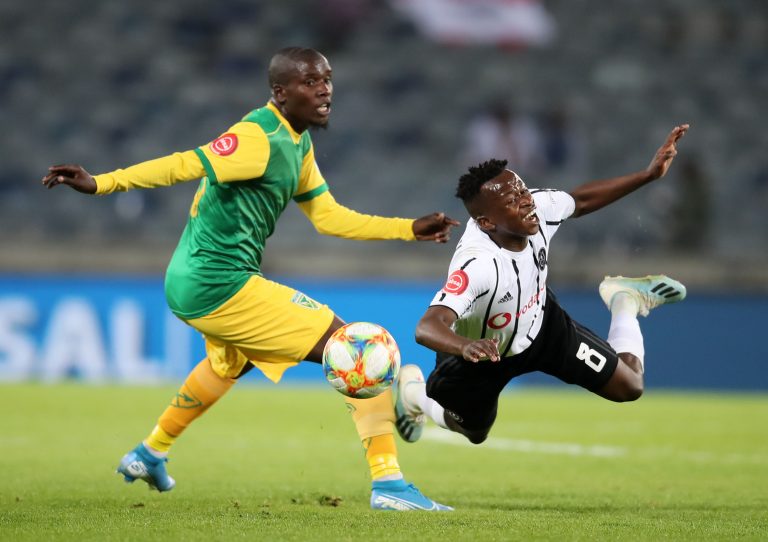 Siphesihle Ndlovu of Orlando Pirates challenged by Michael Gumede of Golden Arrows during the Absa Premiership 2019/20 match between Orlando Pirates and Golden Arrows at Orlando Stadium. (Samuel Shivambu/BackpagePix)
Rulani Mokwena’s team played better than they have since Micho Sredojevic’s sudden departure two weeks ago but they still lacked the X-factor in their game.
Pirates looked comfortable on the ball they couldn’t get any precision in their acceleration and passing right up front which rendered their ball possession rather ineffective. It lacked an urgency of a team desperate to change things after a five game winless run.
Arrows came close 20 minutes into the game when Nkosinathi Sibisi was allowed a free header in the Bucs box but the 23-year-old couldn’t direct his header at goal.
Pirates had a chance of their own on 22 minutes with a free kick but Mhango’s take was not convincing and was easily saved by Edmore Sibanda. Innocent Maela tried a header on 39 minutes, but it hit the cross bar with Sibanda beaten.
Mokwena must have tried to inject some energy into his team at half time and they came back from the break with a little more speed going forward and five minutes on also introduced Thembinkosi Lorch.
But Abafana Bes’thende must have also realised that they had a chance at stealing the game and were a bit more determined in their attack, finding spaces behind the Pirates defence early on.

Second half substitute, Nduduzo Sibiya looked to catch Wayne Sandilands with a curler from just outside the box on the right on 76 minutes but the keeper was up to the task and tipped his effort over.

Austin Muwowo was denied being a hero for the Buccaneers on debut with Sibanda tipping over his shot from a free kick a minute to the end.