Swallows looked good to collect all the points on offer at the Cape Town Stadium when Kgaogelo Sekgota scored the opening goal of the game 13 minutes into the first stanza. 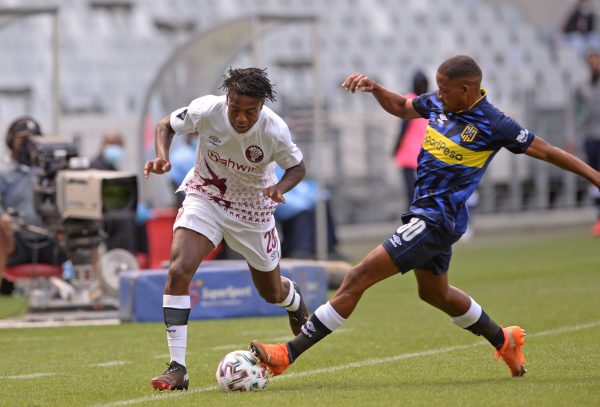 Swallows were riding the wave for a while but the Citizens put the Birds under pressure which resulted in a penalty when Thabo Nodada was brought down by Njabulo Ngcobo in the penalty box.

Mduduzi Mdantsane drew one back for the Mother City side from the penalty spot levelling the scoreline. Statistically, the first half belonged to Jan Olde Rieerink’s side.

Swallows and City came into the second half with each side hoping to take the lead. The Birds tried to fire a few shots towards Peter Leeuwenburgh’s goal without any luck.

It was in the 65th minute when the home side got the numeric advantage over the vistors when Junaid Sait was sent off after a reckless challenge on Bradley Ralani, the Swallows midfielder was trying to take the ball away from Ralani but instead clipped his knee which led to referee Victor Gomez sending him off.  Musa Nyatama got a yellow card for protesting the red card given to his teammate.

Another Swallows member caught in the crossfire between Sait and Gomez was technical staff member Thabane Makura who was sent off with a red card for adding his voice to the protest initiated by Nyatama.

Nyatama’s shot on target was cleared by Abbubaker Mobara for a corner given to the visiting team. Thabo Mosadi came on as a substitute and fired two short from range but didn’t do enough to trouble Leeuwenburgh.

Mosadi had the best chance of the second half but he was unable to steal it for the 10 men of Swallows but his shot went wide at goal. City tried to make their numerical advantage count but Swallows was solid in defence with the match finishing at 1-1.