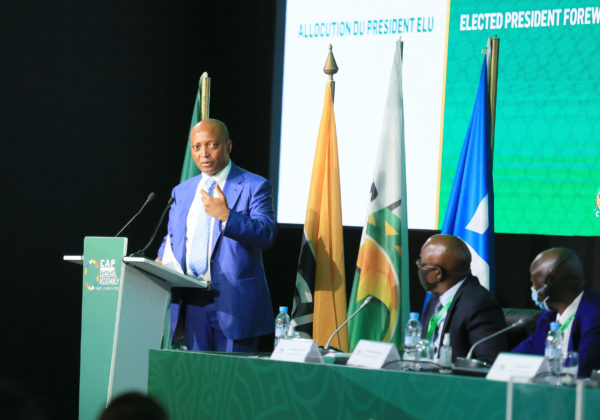 New Caf president Patrice Motsepe has handed the presidency of Sundowns down to his son Tlhopie. Picture: BackpagePix

Mamelodi Sundowns co-head coach Rulani Mokwena has welcomed the change in leadership at Mamelodi Sundowns, with Tlhopie Motsepe set to take over as chairman of the club.

Patrice Motsepe was on Friday confirmed as president of the Confederation of African Football, meaning he can no longer be president of Sundowns as it represents a conflict of interest.

Instead, his eldest son Tlhopie will be the new chairman. Motsepe Jnr will be assisted by Premier Soccer League board member Dr Rejoice Simelane, who will vacate her previous role as club director and ascend to the office of deputy president at Chloorkop.

“We are excited because this also means that new leadership comes in at Sundowns. The fortunate part is that the president has always been one to prepare people and also give opportunities to people to lead and we are excited to welcome new leadership with his son and Dr Rejoice (Simelane), together with the rest of the board. It was never a one-man show at Sundowns,” said Mokwena.

“The president was leading with the support and the hard work of the board. Although his departure will leave a big void, as a club we are fortunate that we have people with equal capacity and a lot of potential to take over,” he added.

Not much is known about Motsepe Jnr as he and his younger brothers, Kgosi and Kabelo, have done their best to shun the media spotlight.

“I think we must be excited for African football to get a leader such as Dr Motsepe,” said Sundowns co-head coach Rulani Mokwena.

“First for us is to congratulate him on ascending to power and his rightful position, a coronation couldn’t have been given to anyone more deserving and more capable of leading us into a new era as Africans involved in this beautiful game.

“We wish him all the best, the work he has done for South African football … has allowed him to be recognised as one of the best leaders on the continent. We know the amount of hours he puts in and how meticulous he is with his leadership principles. It really does excite us … and hopefully we get to witness the greatness ahead for the African continent.