Hunt couldn’t give a straight answer, suggesting that he would be revealing some secrets if he were to speak publicly on the matter. 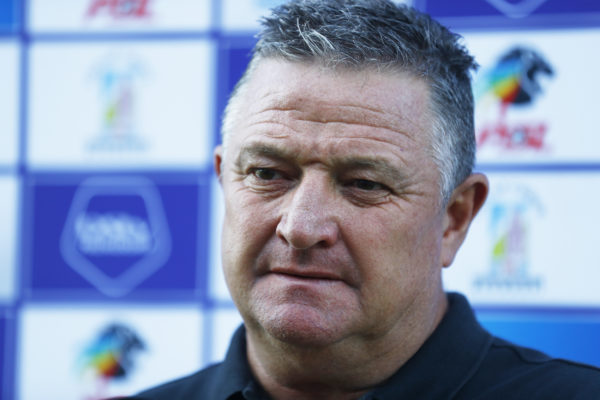 It was a goal that elated Steve Barker so much that he almost did the aeroplane run made famous by his uncle Clive Barker back in the days, but the player who sent the ball into the net didn’t celebrate.

That’s what happened when Phathutshedzo Nange pulled Stellenbosch FC ahead for the second time in their DStv Premiership match against Kaizer Chiefs at FNB Stadium on Tuesday evening.

Nange had just come on as a sub when Amakhosi equalised to make it 1-1, but found himself unmarked inside the Chiefs box and turned in a Stanley Dimgba cross with an expertly taken header that left Daniel Akpeyi only angry at himself and his defence for not closing him down.

This started debates on social media as conflicting opinions on why he didn’t celebrated flew around, some saying it was because of the respect he had for Gavin Hunt while others believe it was because he is on his way to Naturena next season.

Nange is one of the players who have been heavily linked with a move to Amakhosi when their transfer ban ends in June. There are even suggestions that Stellies and Chiefs reached a gentlemen’s agreement on the ‘loan’ of Nange after he had trained with the Soweto side while hey awaited their appeal against the ban.

Asked about this, Hunt couldn’t give a straight answer, suggesting that he would be revealing some secrets if he were to speak publicly on the matter.

“I know how to answer that but I am not going to answer it. I know what to say and what not to say… but yeah, he is a good boy and we’ve come a long way,” was all Hunt said.