Broos explains why he will not coach Bafana next month

"I don 't want to be sick, not only for myself, but also for South Africa," said Broos, who jets home towards the end of this month to get his second Covid-19 shot. 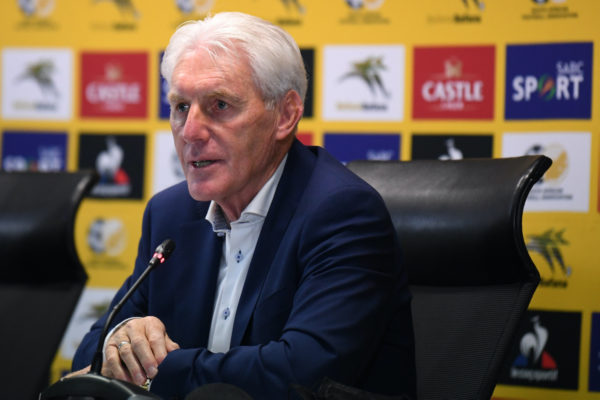 Hugo Broos will not be on the touchline for his first international matches in charge of Bafana Bafana, because he has to go back to Belgium to receive his second Covid-19 vaccine.

Broos explained at a press conference at Safa House on Wednesday that his two assistants, one Belgian and one South African, will take charge of two international friendlies in June.

His Belgian assistant is Cedomir Janevski, who was born in Macedonia, but is now a Belgian citizen, and who is currently head coach at Olympiakos Nicosia in Cyrpus.

Broos has yet to decide on which local coach will be at his side in the months ahead, though he said he expected to make a decision in the “next days.”

“I will be here until May 24,” explained Broos.

“We live in this world of Covid-19 and I already had the first vaccination in Belgium and have a second one in the beginning of June. In the next months we will travel a lot and I don’t want to be sick, not only for myself, but also for South Africa.

Broos, who coached Cameroon to glory at the 2017 Africa Cup of Nations, admitted he needs a local coach to help him with knowledge of the South African game.

“This is a different country, with a different culture. Next to a Belgian assistant, I need a South African coach. I will also give my experience to him. And something like CHAN (the African Nations Championship) or the Cosafa Cup, or the Mandela Challenge, he will coach that.”

The Belgian added that he would also be leaving the coaching of the side at the Tokyo Olympic Games to the current Under-23 head coach David Notoane.

“In July is the Olympics. They asked me if I will do that and I said ‘no’. I need to have respect for the coach who qualified the Under-23 side for Japan. I will monitor the games and be in contact, but he will be the coach of this team,” said Broos, who also admitted that there was also interest from the DR Congo in his services.

“If you have a choice it is a luxury for a coach, a choice between good projects. I made a choice, that is it,” said Broos.