This comes after Bucs edged Usuthu 1-0 in a DStv Premiership tie at the Orlando Stadium on Thursday. 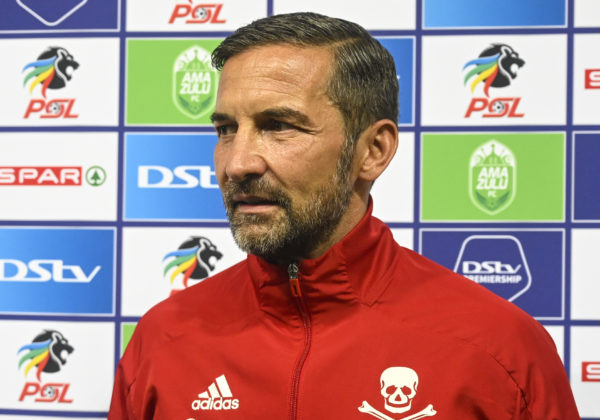 Under fire Orlando Pirates coach Josef Zinnbauer says getting maximum points was the main objective for his charges against AmaZulu.

This comes after Bucs edged Usuthu 1-0 in a DStv Premiership tie at the Orlando Stadium on Thursday.

The win increased Bucs chances of finishing in second place on league standings.

Heading into this game, the German mentor says he told his players to go out and fight for maximum points and is happy that they managed that against a “good” AmaZulu side.

“I think we were good in the game, I have to say this before I start with the explanation, AmaZulu have a good team and for us it was important we come quick in the game. The structure in defence and offense was good today, they (the players) worked for each other. In the first half I think we came close to scoring the first goal. And in the second half we came out and in the first 10 minutes we had two good chances to score. But the final pass, or the final touch was not 100 percent correct,” Zinnbauer explained.

“But what was important for us in this game was the result. I think we know that we are coming closer to the good places that we want to be in by the end of the season. And before the game, I said to the players the player performance is not that important today. We had a big game in the last three days. The conditioning was probably out for some players after 60 or 70 minutes. This was the reason I told the players to go out there and fight. Fight for three points, fight for the supporters, fight for the club and fight for yourselves. They did it very well and I think we deserved to win the game. We played forward and got the victory.”

Despite the win, Zinnbauer remains under pressure with some of the supporters at the club, who are calling for him to step down.

The fans have organised a march to the Pirates home-ground on their last league game of the season on 5 June after failing to qualify for the semi-finals of the Caf Confederation Cup.

The Soweto giants, who are in fourth place on the league table with 46 points will be looking to register their second successive victory when they take on TS Galaxy away from home on Sunday.