"We lost with one goal, we still have another match to play in South Africa, the VAR wasn't used in favour of Wydad like during the previous matches," said the Wydad Casablanca coach after his side lost to Amakhosi. 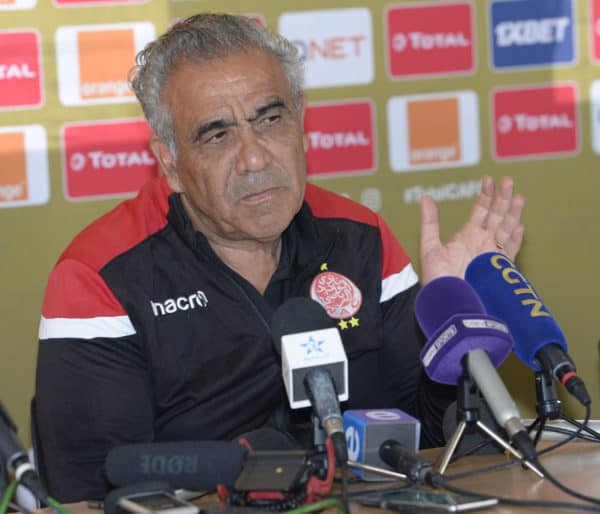 Benzarti slammed the decision to consult VAR on the legitimacy of Amakhosi’s goal in their semi-final clash with Kaizer Chiefs. Picture: Lee Warren/Gallo Images.

Most were in agreement after Kaizer Chiefs’ Caf Champions League game against Wydad Casablanca on Saturday – terrible officiating was helped out by VAR in awarding Samir Nurkovic’s goal.

Many took to social media to express how they felt, including former top PSL referee Ace Ncobo

Others can only sbwl the feeling of what Kaizer Chiefs supporters we’re feeling watching Samir Nurkovic giving this instruction, for VAR intervention… pic.twitter.com/k0ihpEnbtw

Decisions which make my blood boil! You run more than 4m behind the offside line and then have the audacity to raise your flag for offside where’s none! pic.twitter.com/AeR8J5bab5

Another fan had a good laugh at the fact that Morocco coach Faouzi Benzarti had bizarrely looked at VAR as a reason his side lost to Chiefs, even though the correct decision was clearly given.

Kaizer Chiefs managed to record an all-important away goal in the first leg of the Caf Champions League semifinal clash with Wydad in Morocco.

Following Chiefs players’ protests when Samir Nurkovic’s goal was disallowed, after a VAR review it was discovered the linesman didn’t keep up with the pace of Wydad’s defender which affected his judgment of the Amakhosi goal.

Benzarti seemed to be upset by the decision to consult VAR on the legitimacy of Amakhosi’s goal.

“We lost by one goal, we still have the second match to play in South Africa. The VAR wasn’t used in favour of Wydad like during the previous matches,” was Benzarti’s reaction at a post-match press conference.

“We’ll try to overturn the result in South Africa. I can’t fault the players, they gave one hundred percent. They were present mentally and physically but this is football.

“We accept the result and we look forward to doing better in the next match.”

Kaizer Chiefs defender Daniel Cardoso pre-empted Saturday’s good decision when he praised the introduction of VAR ahead of the semifinal. Nurkovic, meanwhile, was understandably happy when his goal stood on Saturday, praising VAR after the game.