It's advantage Chippa United as they managed to get a point away at Richards Bay in a promotion playoffs match at uMhlathuze Sports Complex on Saturday afternoon. 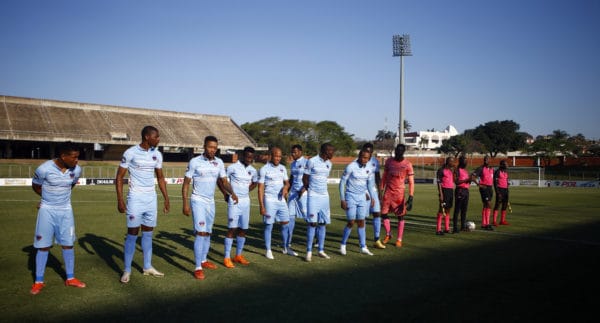 It's advantage Chippa United as they managed to get a point away at Richards Bay in a promotion playoffs match at uMhlathuze Sports Complex. (Photo by Steve Haag/BackpagePix/Gallo Images)

The game didn’t light up in the first half and while chances were created, they were not utilised properly. It was goalless at half time. The second half came to life immediately with Richards Bay forcing Chippa keeper, Ismael Watenga to a great save just after the restart.

But it was the visitors who were to open the scoring, with Maloisane Mokhele setting up Peter Maloisane up with a great ball in front of Richards Bay goals.

Maloisane sent his shot nicely past Malcolm Jacobs to give Chippa the lead in the 57th minute. But just as Chippa would have thought they had the three points in the bag, the Natal Rich Boys found one back.

Siyabonga Vilane rose above the Chilli Boys defenders to equalise in the 73rd minute.

The draw however still favours Chippa and sets them up for a quick return to the Premiership as they are now one point clear atop the three-team mini log with one game to play.

They need three more points from their last game to make a safe return to the top flight. And interestingly enough, Chippa will probably get the three points off the last game as they are set to host Royal AM who have boycotted the games and refused to participate.

Royal AM forfeited both home games against Chippa and Richards Bay during the week. They have said they are not playing because the PSL is in contravention of the constitution by continuing with the playoffs while they have a court interdict against the games.

Shauwn “MaMkhize” Mkhize’s side are challenging a court ruling that declared Sekhukhune United as the winners of the GladAfrica Championship.

Richards Bay are set to play Royal AM on Tuesday, but it is unlikely that the Pietermaritzburg based side will show up.