Mosimane: I have won eight trophies but nobody cares

'At the Fifa awards in the Ballon d’Or and the Coach of the Year categories, we don’t feature… it is only the Europeans who feature,' said the Ahly head coach. 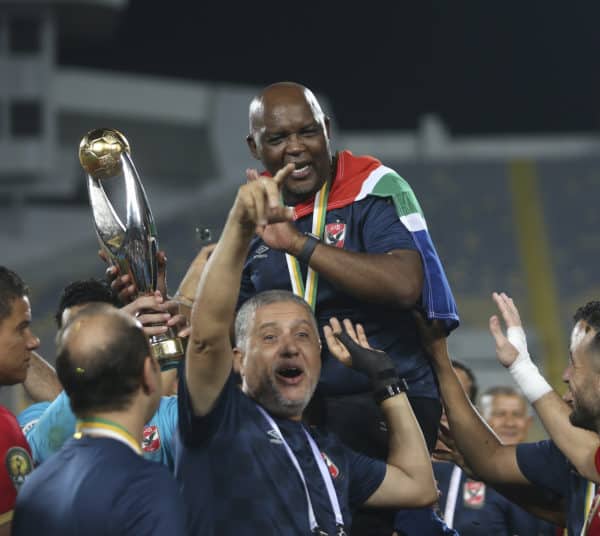 Pitso Mosimane, is held aloft by his teammates after coaching Al Ahly to another Caf Champions League triumph on Saturday. Picture: BackpagePix.

Pitso Mosimane feels he has every right to be recognised beyond African borders and have his name mentioned along global heavyweights such as his favourites Jose Mourinho, Pep Guardiola and Carlo Ancelotti, just to name a few.

“At the Fifa awards in the Ballon d’Or and the Coach of the Year categories, we don’t feature… it is only the Europeans who feature. I have won eight trophies but nobody cares (because) I am not a coach of Liverpool but the history stays.” Those are the sentiments of Mosimane, who believes he deserves more recognition for his work.

Since it’s ‘sing Pitso praises’ season, you cannot help but want to lean towards his line of thought because of his recent unparalleled success for both his former employer Mamelodi Sundowns and current team Al-Ahly. Never mind this past weekend’s Caf Champions League triumph in the final against Kaizer Chiefs in Morocco – “Jingles” has collected eight gold medals over the last year and a half.

The DStv Premiership, Telkom Knockout and the Nedbank Cup were all won with Sundowns. Then with Ahly he won the Egyptian League, Egyptian Cup, Champions League (twice) and the Caf Super Cup together with a bronze medal in the recent edition of the Fifa Club World Cup. If it were a European coach who received all of those accolades in the same period Mosimane did, would a vote to decide who the best coach in the world not be just a formality?

But if you are African, you seemingly need to do more, Mosimane believes. His issue is far beyond his personal achievements. The former Bafana Bafana coach wants to see more Africans occupying the hot seat of top clubs in the continent, insisting that: “there is much we can do”.

“He could have gone to Europe and brought all the Europeans who are coming to Africa to coach but we have Africans who can win it ourselves. Why don’t we believe we can win it?”

Mosimane added: “The 2019 Afcon was won by Algeria with an Algerian coach (Djamel Belmadi) and the losing finalists were Senegal, coached by Aliou Cissé. We sometimes give the Europeans too much respect and we forget who we are. We just look for anybody from Europe and we give them the team, but we have the personnel.”