Both teams might have won this DStv Premiership encounter, but neither had their shooting boots on. 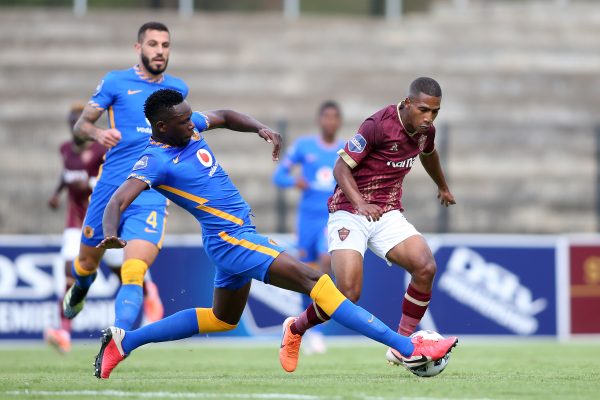 Kaizer Chiefs’ winning DStv Premiership run came to an end on Saturday as they were held to a goalless draw by Stellenbosch FC at the Danie Craven Stadium.

ALSO READ: Nyatama rescues a point for Stellenbosch against Sundowns

It could have been worse for Gavin Hunt’s charges, as Leletu Skelem and Augustine Dimgba both wasted wonderful second half chances for Steve Barker’s side, though Amakhosi also had their share of opportunities, Samir Nurkovic heading wide with the goal gaping towards the end.

Lebogang Manyama and Happy Mashiane were both rewarded for goals in midweek with starts against Stellenbosch, while Erick Mathoho returned to the side in the heart of the defence, having spent a period in isolation after testing positive for COVID-19.

Stellenbosch controlled possession early on and Ashley Du Preez blasted a shot well off target, before Chiefs started to find a groove, relying as usual on the wily hold up play of Samir Nurkovic and the midfield skills of Nkosingiphile Ngcobo.

In the 16th minute, Nurkovic found himself through on goal, but his effort was weak and easily saved by Lee Langeveldt.

Philani Zulu then came in from the left flank and fired a shot just over before at the other end, Nigerian forward Augustine Dimgba fired an effort straight at Daniel Akpeyi.

In the 36th minute, Nurkovic played in Ngcobo, who showed a brilliant sleight of foot but then pulled his shot wide.

Dimgba then showed fantastic skill to get to the byline and pull the ball back for Argentinean Junior Mendieta, but he put a great chance off target.

Manyama came more into the game as the half wore on and his fantastic cross found Nurkovic, but Langeveldt was on hand to block wide.

Akpeyi had to be alert on the stroke of half time, sprinting off his line to clear just before Mendieta got to the ball but the sides went into the break goalless.

Mashiane looked to make it three goals from three matches just after half time, firing in a rocket that was pushed away by Langeveldt.

Stellenbosch, however, also came out after the break with far more intent, Steve Barker throwing Leletu Skelem into the fray. And the 22 year-old should have given the home side the lead as Manyama carelessly gave the ball away on the edge of his own box, and Du Preez’s low cross found the young attacker.

Skelem, however, delayed his shot too long, and Mathoho flung himself in to make a fine block. Just a couple of minutes later, Dimbga failed with an even better opportunity, as Marc Van Heerden’s cross found him with the goal gaping, but he headed over the bar.

Manyama was far more effective at the other end in the 63rd minute, his delightful flick setting up Darrel Matsheke, but his effort was wild and wide.

With nine minutes left, it was Chiefs’ turn to waste a gilt-edged opportunity, Nurkovic heading substitute Leonardo Castro’s cross wide from point blank range with only Langeveldt to beat.

And Chiefs came even closer to scoring a couple of minutes later, as Castro supplied another cross and Siyabonga Ngezana’s effort squirmed under the body of Langeveldt but the ‘keeper recovered to gather before it crossed the line.