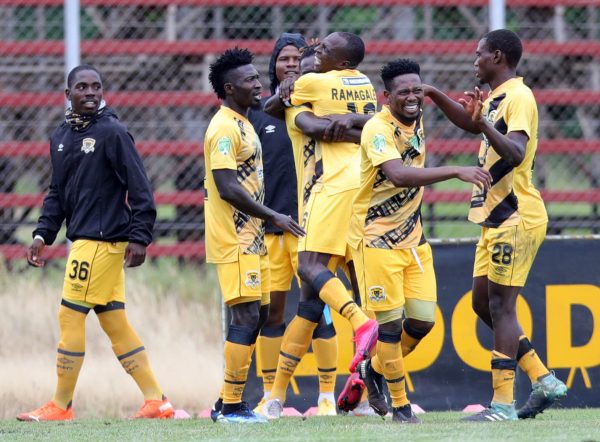 Black Leopards are currently the favourites to get relegated. (Picture: Samuel Shivambu/BackpagePix)

Mohamed Anas’ second half header was enough to give Black Leopards a narrow 1-0 win at home to AmaZulu on Saturday and take them into the quarterfinals of the Nedbank Cup.

ALSO READ: Pirates wary of cup upset as they head to Maritzburg

The Ghanaian’s return to form has been key to Leopards’ mini-revival of late, as he also netted both goals in the DStv Premiership win at Golden Arrows.

For AmaZulu, meanwhile, it was a disappointing outing as they failed to really test Leopards ‘keeper King Ndlovu in the entire game.

Benni McCarthy made a host of changes from the DStv Premiership win over Kaizer Chiefs, including giving former Bafana Bafana and Kaizer Chiefs star Siphiwe Tshabalala his first start for the club.

Tshabalala was used in a deeper midfield role by McCarthy, while another veteran, Lehlohonolo Majoro started in attack, alongside the 21 year-old Siphesihle Maduna.

Maduna had the first clear opportunity of the game, with his shot blocked by the Leopards defence. The closest Usuthu came to scoring in the first half came from a trademark Tshabalala free kick, met by the head of Tsepo Masilela, whose effort crashed out off the crossbar.

Leopards also pushed forward, playing the ball around nicely on a rather patchy-looking surface, but the closest they came in the opening stanza was when AmaZulu goalkeeper Neil Boshoff had to tip away an in-swinging corner from under his own bar.

Six minutes after the break, however, it was Lidoda Duvha who opened the scoring. AmaZulu cleared another in-swinging corner, but Leopards recycled possession, and a superb cross from Tsheamo Mashoene was headed back across goal for Anas to nod into an open net.

Usuthu pushed for an equaliser with McCarthy bringing on Mbongeni Gumede for Tshabalala, and Siyethemba Sithebe for Maduna. But it was Leopards who came close again, with a Rodney Ramagalela bullet tipped over the bar by Boshoff.

Has Benni McCarthy lost the dressing room at AmaZulu?
6 hours ago
6 hours ago

Arrows to play the ‘Arrows way’ in KZN derby, insists Seema
9 hours ago
9 hours ago

Has Benni McCarthy lost the dressing room at AmaZulu?
6 hours ago
6 hours ago

Arrows to play the ‘Arrows way’ in KZN derby, insists Seema
9 hours ago
9 hours ago