The Baroka striker came off the bench to transform the game for South Africa. 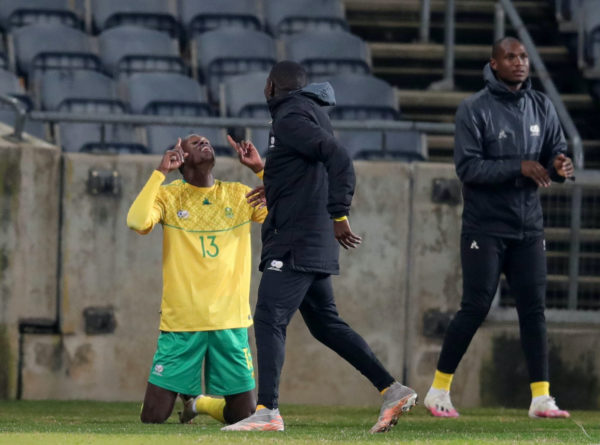 Evidence Makgopa came off the bench to spark a brilliant Bafana Bafana second half comeback to beat Uganda 3-2 in a friendly international at Orlando Stadium on Thursday.

Makgopa, who turned 21 on Saturday, and the following day picked up the DStv Premiership Most Promising Player Award, capped an amazing week by netting a brace on his Bafana debut, either side of a first Bafana goal for Maritzburg United’s Bongokuhle Hlongwane.

The transformation was remarkable from Bafana after an awful first half, where they didn’t threaten the Cranes goal and fell behind to a header from Ibrahim Orit. All in all, the result represented a good start to the Hugo Broos era, even if the Belgian wasn’t in the country.

This was a Bafana side so unrecognisable that most of the starting line-up were making their debuts as the match kicked off at Orlando Stadium.

The build-up to this game had been seriously hampered by illness and injury, with the likes of Percy Tau, Teboho Mokoena and Rivaldo Coetzee all absent. Even on the bench, only Helman Mkhalele was able to take his rightful place, with Broos absent and Cedomir Janevski having tested positive for Covid-19.

So perhaps it was not surprising that South Africa were horribly disjointed in the early stages.

It was a young Ugandan side, with six of their team born in 1998 or later, that attacked Bafana with far more intent, going in front in just the 17th minute. Cranes captain Emmanuel Okwi, who has been linked in the past with both Kaizer Chiefs and Orlando Pirates, sent in a brilliant cross, that 22 year-old Ibrahim Orit dived in at the back post to head past Williams.

Okwi should have put Uganda further ahead minutes later, a mistake by Craig Martin giving him a clear run at goal, but the Egypt-based attacker dragged his shot wide.

Bafana made a couple of attacking changes at the break, with young Baroka striker Makgopa making his debut in place of Nkosinathi Sibisi, and Thabiso Kutumela replacing Denwin Farmer.

And Makgopa immediately threatened as he broke the offside trap and drilled in a left-foot shot that Chippa United’s Ishmael Watenga kept out at his near post.

The lively Makgopa was not to be denied in the 62nd minute as he arrived at the near post to flick home Kutumela’s fine cross, the two substitutes making an impact in a far better second half display.

Kutumela, coming off a fantastic season with Maritzburg United, should have put Bafana in front not long after, as he found himself free in the box, but shot too close to Watenga, who made the save.

Bafana, however, took the lead in the 67th minute, as Kutumela’s teammate at United, Hlongwane, cut in from the left and curled a fine finish past Watenga.

Makgopa then added a brilliant third, rifling a vicious low finish past Watenga, which was just as well as Uganda substitute Abdu Lumala headed past Williams with two minutes left to set up a tense finish.