Chabalala, who saw his contract with the Buccaneers expire at the end of June, is currently in a pre-season camp with Pirates 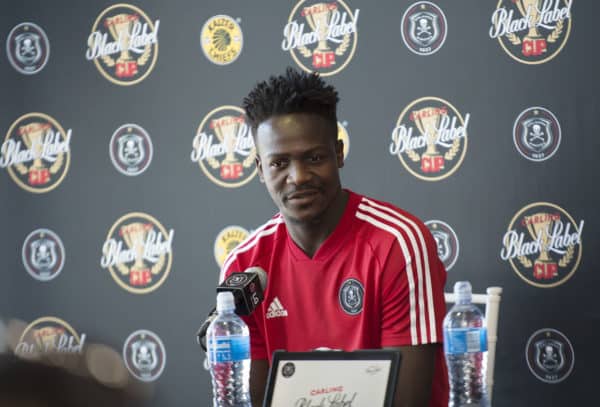 Despite his contract having come to an end last month, Justice Chabalala is keen to sign a new contract with Orlando Pirates.

This according to his agent Ratshibvumo Mulovhedzi of Rush Hours Sports Management.

Chabalala, who saw his contract with the Buccaneers expire at the end of June, is currently in a pre-season camp with Pirates and according to Mulovhedzi, the defender could well stay with Pirates as coach Josef Zinnbauer and the fans love him.

“He sent me a picture of himself smiling in camp and I could tell that he is happy and is trying hard to impress the technical team and I’m sure he will,” Mulovhedzi told Phakaaathi.

Reports have emerged that there are several DStv Premiership clubs that interested in the 29-year-old defender including Bloemfontein Celtic, where he spent last season on loan.

“Yes, it’s true that there are clubs interested in him. It’s not only Celtic. There are also teams in Gauteng, KZN and Cape Town who are keen to sign him, but our first option is Orlando Pirates. We will wait for the chairman (Irvin Khoza) to tell us what he has decided. I’m sure we will hear from the chairman soon.

“Orlando Pirates fans love Justice and even now, they have voted for him for the Black Label Cup and he wants to repay the faith shown to him by the fans. He is also eager to play for Orlando Pirates this season, but that of course depends on what the chairman and the technical team wants. But I tell you that coach Josef Zinnbauer is keen to work with Justice. “

Chabalala joined from Free State Stars in 2016, but has often been loaned out to Chippa United and Celtic.

Last season he made 20 appearances in all competitions for Phunya Sele Sele.