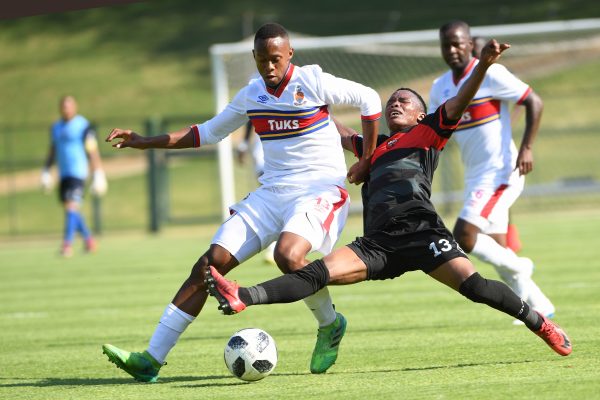 Lucky Setelele’s goal was enough to send the capacity crowd at Kameeilsrivier Stadium into wild celebrations when the final whistle was blown, but coach Dan Malesela still feels his team could have done better.

“It was a game of a lot of errors,” said Malesela. “I think we made life difficult for ourselves where it should not have been. We didn’t take risks when we could have. We didn’t exploit their wings enough to try and penetrate and eliminate their full backs. If we had we would have found joy. But we started that very late in the match. Our movement in the box was somewhat limited.
Defensively, it was also patchy in some moments,” said the former Chippa United coach.

Malesela said he wants more of the same results in their next games so they can join the team who are competing for the NFD title and promotion to the Absa Premiership.

“We need to get three more games where we get full points so that we can push ourselves to a position where we can say we can compete. We need to turn our dominance into points.”

Stellenbosch 1 (L. Skelem Tshakhuma 1 (L. Mabotja)
This top of the table clash was played at high intensity with both looking for a win to go top and open some gap but it was not to be as Lebongang Mabotja brought Tshakhuma back just when Leletu Skelem had put the home side ahead. Stellies remain top, just one top ahead of Sello Chokoe’s Tshakhuma.

Real Kings 1 (T. Kunene) Richards Bay 1 (L. Saal)
Richards Bay will be happy with a point away to the Magic Boys who have recently found their groove. Thobani Kunene put Simo Dladla’s side 1-0 to the good but Lionel Saal spoiled the party when he levelled fot the Natal Rich Boys.

Witbank Spurs 0 TS Sporting 0
Sammy Troughton was denied his second win as Abantu Bemthetho arrested his great start to the Siyavutha job. The home side will however be happy with the result against Benson Mhlongo’s side who have proved to be capale of dishing out sucker punches. It was goalkeeper Oscarine Masuluke seventh clean sheet in a row.

Uthongathi 1 (P. Mmodi) Ajax CT 0
The Cane Cutters got back to winning ways again as they overcame Muhsin Etrugral’s highly tactical side at home to move up to fourth place with 15 points, two behind leaders Stellenbosch.

Mbombela United 2 (M. Zimu; L. Nguzana) Jomo Cosmos 0
Muziwokuthula Zimu kept his promise of adding another goal to his tally as he opened the scoring for Tingwenyama before Lucky Nguzana added a second which further sank Ezenkosi who were hoping for an equaliser. Mbombela are now fifth on the standings with 15 points.

Cape Umoya United 0 Royal Eagles 1 (M Wambi)
Umoya’s new home venue is not yet giving them any joy as they suffered their second successive defeat at home, this time it was Mbulelo Wambi who found the net to hand Eagles the three points which moved them away from the relegation zone.

University Of Pretoria 2 (M. Niang; D. Franco) Ubuntu Cape Town 0
It was to be veteran striker Mame Niang who opened the scoring before Diego Franco added a second as AmaTuks inflicted further pain on struggling Ubuntu.