Baxter proud to have taken four points from Nigeria

Bafana Bafana left their Caf African Cup of Nations (Afcon) qualifying chances in the balance as they can now only qualify in March next year if they win or draw against Libya away. 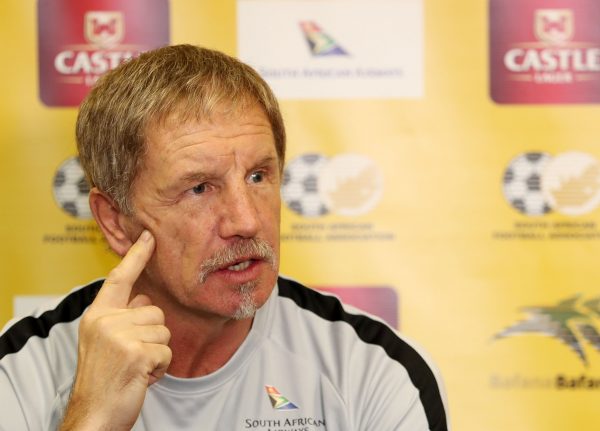 Stuart Baxter’s team drew 1-1 with Nigeria at the FNB Stadium on Saturday – and had to come back from 1-0 down to earn the point.

Buhle Mkhwanazi was unlucky to see the ball hit his own net early in the game but a marauding Percy Tau got Bafana back in the game when he selflessly set up Lebogang Mothiba to score what was easily one of the easiest goals of his career.

Bafana played well and had the Super Eagles on the back foot in most instances but they lacked the killer instinct, letting their opponents off the hook. Now they have the difficult task of getting at least a point against Libya.

“On one hand I am proud, on another I’m very frustrated,” said Baxter after the match. “I felt as if we had been true and played the way we had discussed before the game, so I think we could have knocked them over. But we went long too quickly,” said Baxter after his team changed their style and approach towards the end of the second half.

“And when they were tiring we needed to move them around and get in the spaces in between the lines. The players needed to say to themselves that we can have this. But it’s not easy when you have come from a goal behind. I am proud to have taken four points from Nigeria.”

Baxter was clearly unimpressed with how his team abandoned the game plan and when probed further about this, Tau said he wanted to clarify things as he was on the field. He said they realised Nigeria were struggling with the intense heat and getting tired so they decided to try and play behind their defence.

“They had five in defence and two central midfielders in front of them. We could not get into those pockets. They were tired because of the heat and their right central defender was playing with an injury. We felt we could get behind them and score, but it didn’t work out,” said Tau.

Baxter however remains adamant Bafana can get the job done in March when they face Libya, taking heart from their surprising victory in Nigeria at the start of their campaign.

“We went to Nigeria and got a win. We had a clear plan. There is no reason we shouldn’t be looking forward to the game (against Libya),” he said.