The result saw City move up to fourth in the log standings, while Arrows moved down to sixth spot. 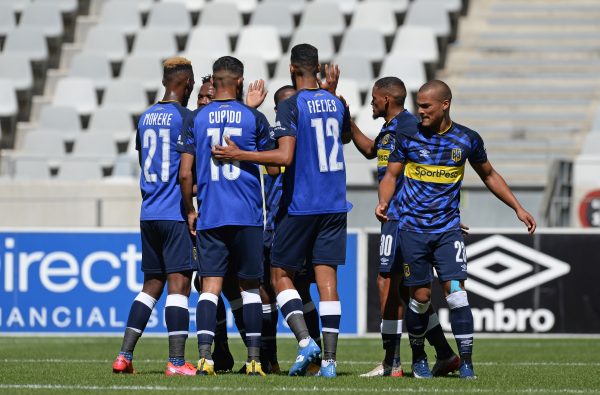 Cape Town City ended Golden Arrows’ unbeaten run in the DStv Premiership when they beat them 4-2 at the Cape Town Stadium on Sunday.

The result saw City move up to fourth in the log standings, while Arrows moved down to sixth spot.

City made their intentions clear from the start by taking the game to Abafana Bes’thende. Thato Mokeke drew the best out of Sifiso Mlungwana in the fourth minute, but found the goalkeeper alert to the danger.

It did not take the home side log though to find the back of the net, as Craig Martin finished off a slick City move and beat Mlungwana with a good strike in the in the 14th minute.

Abafana Bes’thende were forced to make a change in the 28th minute after Gladwin Shitolo failed to recover from his injury. He was replaced by Lindokuhle Mtshali.

Arrows had a penalty appeal down turned down by referee Tshidiso Maruping in the 33rd when the ball seemed to have hit Keanu Cupido’s hand inside the box, but the referee waved play on.

The score remained 1-1 at the half-time break.

Abafana Bes’thende were awarded a penalty just three minutes into the second half after Tareeq Fielies pulled down Knox Mutizwa inside box. Mutizwa then converted the resultant penalty to give Arrows the lead for the first time in the match.

Fielies made amends of his earlier mistake in the 62nd minute when he headed home a Surprise Ralani corner kick to equalize for City.

Mutizwa wastes a good chance to grab a brace and to regain the Arrows lead when he shot straight at Peter Leeuwenburgh from a one-on-one situation following a mistake at the back by Fielies.

Arrows were to be punished for that wasted chance a minute later when Mduduzi Mdantsane beat an offside trap before rounding off the keeper and smashing the ball into an empty net.

Fagrie Lakay then put the game beyond Arrows’ reach when he chipped goalkeeper Mlungwana to give City a 4-2 lead, with the game eventually ending with that scoreline.

Bradley Grobler and Sipho Mbule scored the goals for Matsatsantsa a Pitori.