Pirates have been blowing hot and cold for the most part of the season, with the club struggling for consistency in their performance. 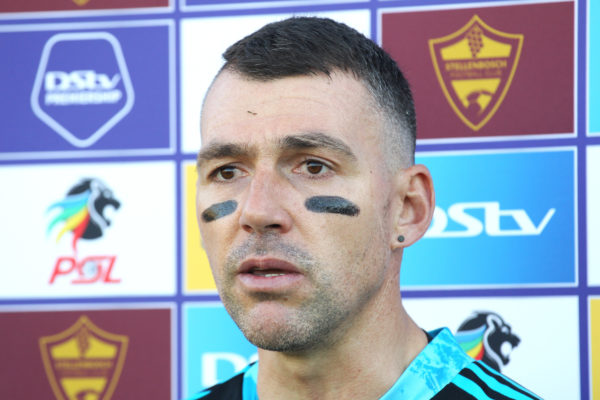 Wayne Sandilands is said to be ready to retire and take a new role at the cluh. (Shaun Roy/BackpagePix)

With the DStv Premiership season coming to an end, Orlando Pirates goalkeeper Wayne Sandilands has called for consistency at the club following their goalless draw with Stellenbosch FC at the Danie Craven Stadium on Tuesday.

In their last three games, Pirates lost 3-0 to Mamelodi Sundowns, before bouncing back with a convincing 3-0 victory over Black Leopards, only to play to a goalless draw against Stellies.

Sandilands, who walked away with man-of-the-match accolade was impressive on the day, as Stellies dominated the tie and created a lot of goal—scoring chances.

The Bucs keeper admits that their main objective was to win the match, but they will now have to move forward and concentrate on their next game, which is agaisnt Raja Casablanca in the last eight of the Caf Confederation Cup at the Orlando Stadium on Sunday.

“I think we wanted the three points obviously,I think as big team we came here for three points, unfortunately the game turned out a little bit different. Look, we will take the point. We will go back to Joburg now because we have a big game over the weekend. We just have to make sure that we rest well and perform at our level best,” said the Bucs goalkeeper.

“We just have to be a little bit more consistent, we have to make sure we stick together, we pull together, we work hard and go out swinging in these last few games. That’s all we can do, give our best and take each game as it comes and hopefully we will get positive results.”

Sandilands has played 16 games this season for the Buccaneers and has eight clean sheets to his name. At 37-years old, the Benoni born keeper has been a very important member of the Bucs squad, particularly in the Confed Cup where he played five out of six games – helping the Buccaneers saunter into the quarter-finals.