'My mission and my goal was to get a ticket to Egypt and the Golden Boot was just a cherry on top,' Kgadiete told the club’s website. 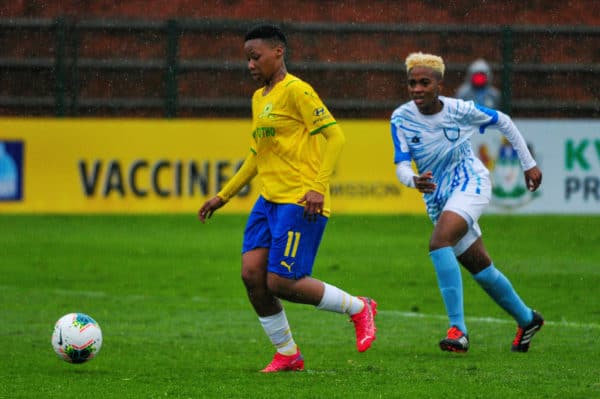 Melinda Kgadiete’s five goals at the Cosafa Caf Women’s Champions League qualifiers came with a Golden Boot award trophy for the striker, but she says going to the tournament, her mind was only set on one thing, which was to qualify for the continental tournament.

Downs ended up winning the qualifiers after beating Black Rhinos Queens of Zambia 3-0 in the final, which saw the South Africans being crowned champions and earning a place in the first ever Caf Women’s Champions League, which will be hosted in Cairo in November.

Kgadiete bagged one goal more than teammates Andisiwe Mgcoyi, who scored four goals in the competition, while Lelona Daweti scored three and Chantelle Essau and Boitumelo Rabale each scored two goals The Tshwane side scored an impressive 22 goals in total at the tournament held in KwaZulu-Natal.

“As a striker, to receive such individual awards is a confidence booster. I wish we could play more of these tournaments now and then because you learn a lot when you play against top teams from other countries.”

Having played against sides from outside the country like Lesotho, eSwatini, Zimbabwe, Botswana and Zambia, the Downs striker added: “It was a good experience, I’ve learnt a lot of things in this tournament. It was a tough tournament playing against teams that you know nothing about is a bit challenging.”

Despite her remarkable performance at the tournament, Kgadiete was left out of the Banyana Banyana 18-woman squad that is set to compete at the Aisha Buhari Cup in Nigeria, starting from 15 September.