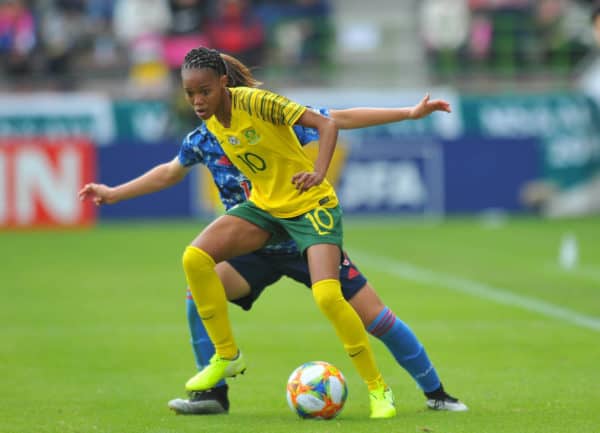 Banyana Banyana’s dominant first half over Nigeria saw them crowned the Aisha Buhari Cup winners after edging the hosts 4-2 at the Mobolaji Johnson Arena on Wednesday.

The South Africans scored three goals in the first half, but they almost let it slip after allowing the Super Falcons to get back into the game in the second stanza.

The Super Falcons had some moments with Asissat Oshoala and Desire Oporanozie’s attacks, but Banyana were solid at the back.

Nigeria’s problems became bigger in the 19th minute as Banyana were awarded a penalty after Onome Ebi handled the ball inside the box.

Midfielder Linda Motlhalo stepped up to take the set-piece, and calmly sent Nigeria shot-stopper Cynthia Nnadozie the wrong way to make it 2-0 for the South Africans.

Nigeria thought they had pulled one goal back in the 20th minute, but Oporanozie was judged to be offside.

Banyana continued their dominance over the home side, as they scored their third goal of match through Gabriela Salgado just before half-time.

The second half saw the hosts start stronger, as they managed to pull one goal back through substitute Vivian Ikechukwu.

Ikechukwu wasn’t then scored the second goal for the Nigerians in the 52nd minute to make it 3-2.

The Nigerians grew stronger in the game as they almost levelled the scores with a long range shot by Glory Ogbonna, but Kaylin Swart made a great save to keep Banyana in the lead.
A beautiful attack started by Thembi Kgatlana saw Motlhalo with a chance to score before being brought down inside the box and the referee pointed to the spot.

Substitute Mamello Makhabane was called on to take the responsibility, and she didn’t disappoint as she made it 4-2 for Banyana.0

And that’s just how things ended, with the Nigerians looking rejuvenated in the second half, but South Africa ended up on the winning side, finishing the game in charge of possession to lift the Buhari Cup, after finishing the six teams tournament with six points and seven goals after beating Ghana 3-0 in the first game.