Hundreds of angry Olympique Marseille supporters protested at the club's Commanderie training centre on Saturday, briefly breaking into the facility. 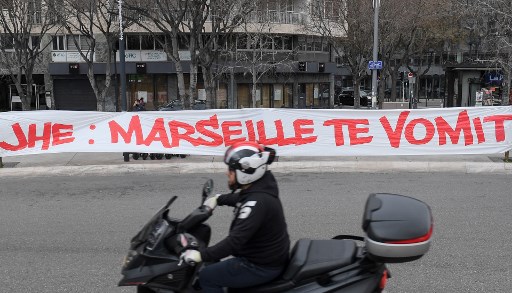 A man on a scooter looks over at a banner hung by Olympique de Marseille football club fans against the club's president Jacques-Henry Eyraud, that reads in French 'JHE: Marseille vomits you', a few hours before the Ligue 1 match against Rennes in the southern French city of Marseille on January 30, 2021. - For several weeks, protests have been organized by OM supporters before the home matches. This Saturday, January 30, the deployment of banners was particularly high with dozens of messages appearing all over the city and widely repeated on social networks. Several of these messages directly targeted Eyraud, very unpopular among OM supporters, upset, after during a conference on management he mentioned the "danger" of having too many Marseillais or OM supporters within the club. OM are currently only sixth in Ligue 1 after three consecutive defeats in the league. (Photo by NICOLAS TUCAT / AFP)

The fans, who were demonstrating against the club leadership and the team’s poor run of results, assembled in the afternoon in front of the Commanderie and threw smoke bombs and firecrackers.

“300 OM supporters violently attacked police officers present to secure La Commanderie,” the local police at Bouches-du-Rhone tweeted, adding that it immediately sent reinforcements “to put an end to the damage” and saying they had made 25 arrests.

Marseille who were second in Ligue 1 when last season was halted by the coronavirus pandemic, have lost their last three league matches to slide to sixth in the table, 14 points behind leaders Lyon.

Manager Andre Villas-Boas said on Friday that he expected to leave at the end of the season.

“The place needs a clear out… I’m responsible for the results and right now they’re awful,” he said.

Marseille are at home to Rennes at 2000 (GMT) on Saturday evening.

For several weeks supporters have organised protests before home matches, which are being played behind closed doors because of the Covid-19 pandemic.

On Saturday an increased number of banners attacking club leadership, including president Jacques-Henri Eyraud, were hung around the city on motorway bridges, roundabouts and even the Corniche overlooking the Mediterranean.

Eyraud, who was born in Paris, was a frequent target after he angered fans during a conference on management when he talked about the “danger” of having too many Marseille residents or club supporters working at the club.

“JHE: No Marseille fans at OM? Get out of here”, said one banner unfurled above a motorway, and “JHE, Marseille vomits you out” said another at the Prado roundabout, a few metres from the Velodrome stadium.