Goals in each half from Thabang Mahlangu and Yamkela Phalane sealed the victory for the home side, who lead the pool in the very early stages. 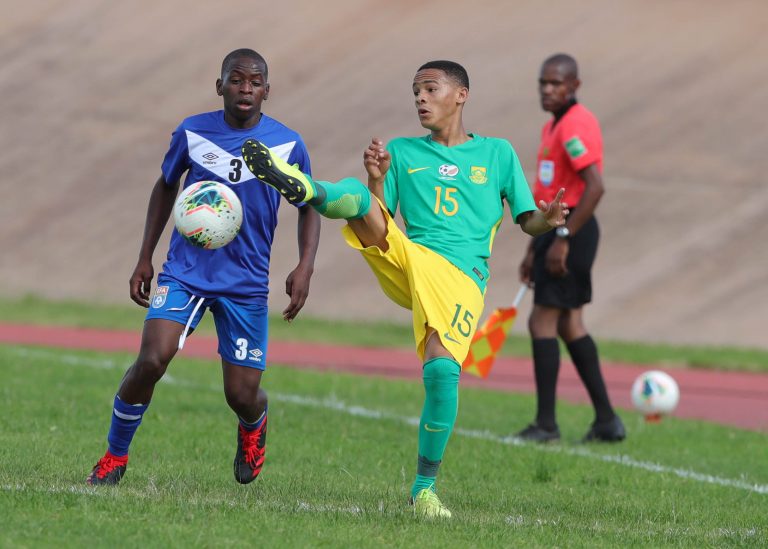 Keaviano Diego Francis of South Africa challenged by Thabo Dlamini of Eswatini during the 2020 COSAFA U17 Youth Championship match between South Africa and Eswatini at Gelvandale Stadium. (Samuel Shivambu/BackpagePix)

Goals in each half from Thabang Mahlangu and Yamkela Phalane sealed the victory for the home side, who lead the pool in the very early stages.

Striker Mahlangu headed home after a teasing cross from Keaviano Francis on 38 minutes.

The lead was doubled in the second period as Phalane was carved down in the box and then stepped up to convert the penalty he won to make it 2-0.

Zimbabwe and Angola played to an entertaining 1-1 draw in their Group A opener, with Zimbabwe taking an early lead through Alpha Chiwashira from the penalty-spot after a handball.

The score was level following another spot-kick at the other end as Domingos was brought down in the box just moments before halftime.

Skipper António Lopes stepped up to equalise for the Angolans as he drove the ball into the bottom corner.

The action continues on Friday when defending champions Zambia take on Comoros in their Group B opener (kick-off 15h30).

Zambia were dominant in their run to the trophy last year in Malawi and will want to set the tone early this time round as well, with a number of players still in the squad from that triumph.

Before that, Malawi will take on Botswana in the pool opener (12h30) in what could be a crucial game for both sides who will fancy themselves as semifinal qualifiers.

The top two teams in each pool advance to the semifinals, with the two sides that reach the final also qualifying for the CAF Under-17 Cup of Nations that is scheduled for Morocco.

You can follow all the action live with our stream on www.cosafa.tv or via our website, www.cosafa.com.