Tau made his debut for English Premier League side Brighton & Hove Albion in the FA Cup clash against New Port County on Sunday. 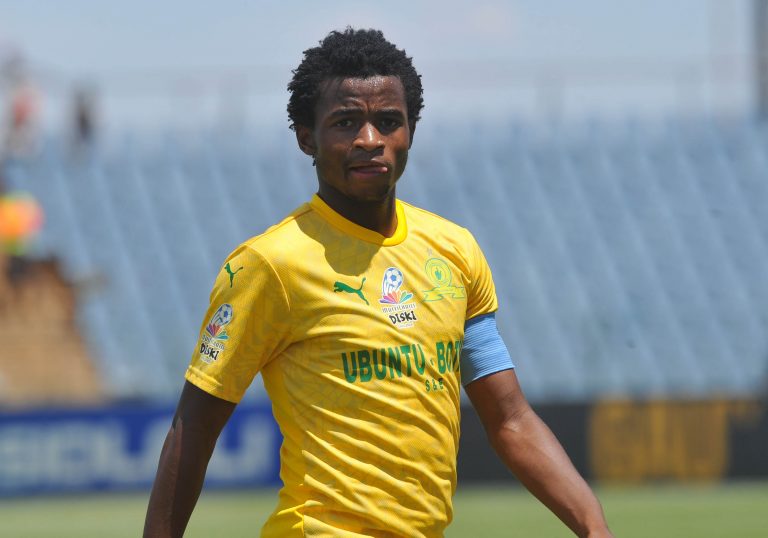 Mamelodi Sundowns academy graduate Promise Mkhuma has opened up about how inspired he is by Percy Tau’s journey.

Tau was recalled by Brighton & Hove Albion from a loan stint at Belgian side Anderlecht last week and made his debut for English Premier League side in the FA Cup clash against New Port County on Sunday.

The Bafana Bafana star came on as a substitute in the 4-3 penalty shootout win against the League two side.

Tau’s journey to the English Premiership has not been an easy one. He joined Brighton from Sundowns in July 2018, but was immediately sent out on loan Belgian second division side Royal Union Saint-Gilloise.

Upon his return he was loaned out to Club Brugge where he did well and caught the eye of Belgian giants RSC Anderlecht who took him on loan at the beginning of the current season.

Brighton then decided to recall him from his loan spell last week.

Mkhuma has spoken up about how Tau’s difficult journey to the English Premiership has inspired him.

“Okay, firstly I would like to congratulate him for his hard work and being patient throughout the journey. It was not an easy journey for him to be loaned out more than once. He never stopped putting effort wherever he was loaned out to,” Mkhuma told the Sundowns website.

“I am really happy to see him back at Brighton because it’s everyone’s dream to be where he is now but it all comes with hard work and staying positive. It is inspiring mostly to us the younger ones that no matter what the circumstances, just stay positive and put in the hard work.”

“It’s a lesson that nothing in life comes easy and lastly, I would like to wish him well and I believe he is gonna do well. Hard work pays off,” concluded the national Under-23 midfielder.

Mkhuma was promoted by Sundowns a year ago and has gone on to grab himself a League Winners medal and a Nedbank Cup medal.