Ndlovu says they had to go in hard in the game to get the desired results after edging the Limpopo-based side 2-1 at the new Peter Mokaba Stadium on Wednesday. 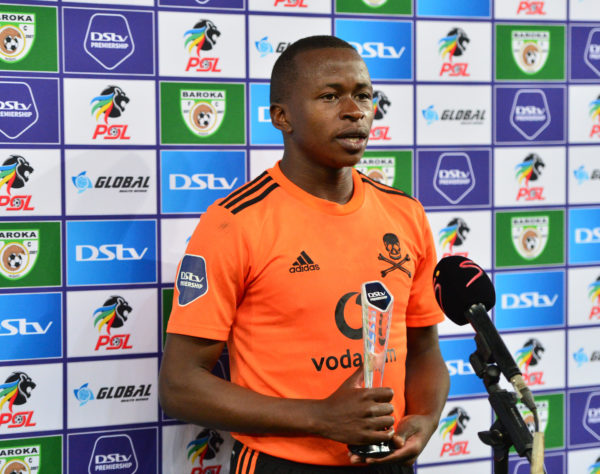 Man of the match Siphesihle Ndlovu of Orlando Pirates is happy that Bucs managed to grind ou a result against a difficult Baroka FC outfit on Wednesday. (Photo by Philip Maeta/Gallo Images)

Orlando Pirates midfielder Siphesihle Ndlovu admitted that they had to prepare thoroughly for their “difficult” clash against Baroka FC.

Ndlovu says they had to go in hard in the game to get the desired results after edging the Limpopo-based side 2-1 at the new Peter Mokaba Stadium on Wednesday.

But, it wasn’t that easy, with Bakgaga having taken the lead first through Denwin Farmer, before Gabadinho Mhango equalised for the Buccaneers.

Bucs eventually got the wining goal through substitute Terrence Dzvukamanja, who scored in the last few minutes of the game.

This was the first win for Pirates against Baroka in their last five meetings, with the rest of the four games ending in draws .

It was a game that Pirates needed to win at all cost with the view of keeping their hopes of finishing in second place alive. But, the win wasn’t enough as AmaZulu FC cemented their place for a top two finish after winning against Swallows FC also on Wednesdayures.

Bucs will now have to strive for a third place finish to get a spot in the Caf Confederation Cup.

“Obviously first and foremost playing Baroka was always going to be a difficult match. We knew that we had to grind, put our bodies where it hurts (on the line). So, I’m very happy that we grabbed maximum points,” said Ndlovu.

“Obviously, we as a team we have a target, so that target pushes us a each and every day to go to training. We make sure that we push our target. The pressure kept us going even though there were some chances that we missed. We had to push through and make sure that we get a victory.”

Having jumped to third place on the log with 49 points, three points behind Golden Arrows who are on fourth place – Ndlovu emphasises the need to have fresh leg for their last game of the season against Tshakuma Tsha Madzivhandila at the Orlando Stadium on Saturday.