'It simply cannot be in the public interest for CAF and SuperSport to contractually exclude millions of non-pay-tv subscribers from watching this game' said the SABC in a statement. 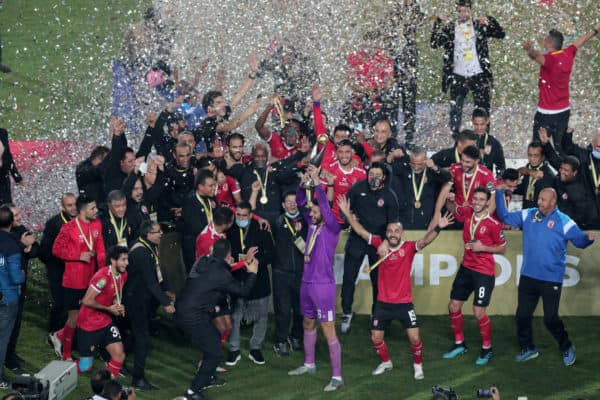 Al Ahly celebrate with the 2020 Caf Champions League trophy. But many Kaizer Chiefs fans will not get to see their side lift it if they beat Ahly on Saturday. Picture: Mahmoud Khaled/Getty Images.

Many Kaizer Chiefs fans will not get to see their team in the Caf Champions League final after the South African Broadcasting Corporation (SABC) confirmed on Friday that they would not be allowed to show Saturday’s clash with Al Ahly at the Stade Mohammed V stadium in Casablanca.

This is because the Confederation of African Football (CAF) signed an exclusive deal earlier in the week with pay-tv station SuperSport to broadcast the game.

SuperSport are a subscription service, meaning millions of Chiefs fans who cannot afford to pay for the game will not be able to see it in South Africa.

“The South African Football Association regrets to announce that it has been denied the opportunity of broadcasting the Confederation of African Football (CAF) Champions League final between Kaizer Cheifs and Egypt’s Al Ahly,” read a statement from the SABC.

“The SABC was surprised and disappointed to learn yesterday that Caf had sold the exclusive rights to broadcast the game to the pay-TV broadcaster SuperSport.

“Despite SABC meeting CAF’s asking price for free-to-air rights, the offer was rejected on the basis that CAF has signed an exclusive deal with SuperSport that covers all rights, including free-to-air rights, for this match. The agreement between Caf and SuperSport is wrong as it places this showpiece of African club football behind a pay-wall, effectively denying millions of South African football fans the opportunity to watch the game.

“It simply cannot be in the public interest for CAF and SuperSport to contractually exclude millions of non-pay-tv subscribers from watching this game. Furthermore, it is disreputable for a pay-tv broadcaster to acquire free-to-air rights with the intention of blocking free-to-air broadcasters from using those rights.”

The SABC did air the Caf Champions League semifinal between Wydad Casablana and Kaizer Chiefs though it was not free-to-air, but on their SABC sports channel, which is only available on Openview, DTT, Telkom One and other streaming platforms.

The Chiefs-Ahly game, for now, will only be broadcast on SuperSport, and kicks off at 9pm