Top award up for grabs in tonight’s PSL Awards

The Absa Premiership's top performing individuals for the 2016/2017 season are set to be rewarded at the annual Premier Soccer League awards at Sandton Convention Centre tonight. 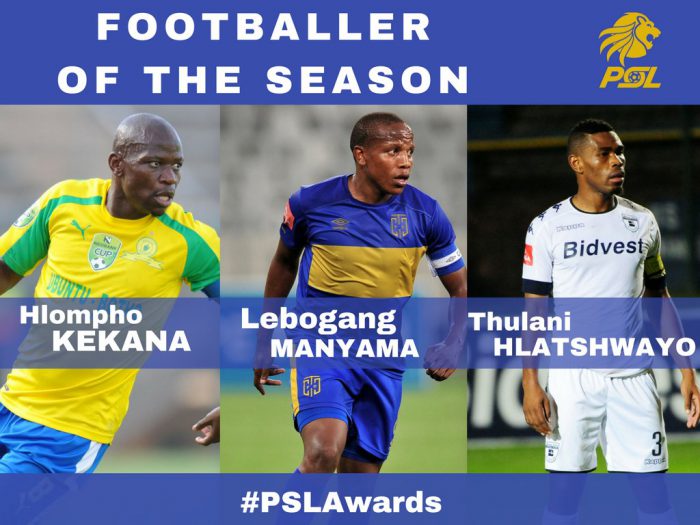 With numerous awards to be handed out on the night, the award that will again be the most highly-anticipated is the Absa Premiership Footballer-of the-Season, which is a three-horse race between Bidvest Wits defender Thulani Hlatshwayo, Cape Town City midfielder Lebogang Manyama and Mamelodi Sundowns midfielder Hlompho Kekana.

The trio are captains of their respective clubs and their leadership qualities have been outstanding as they all guided their teams to silverware this season.

Hlatshwayo, who lifted the MTN8 and PSL League title with the Clever Boys, says getting a nomination is recognition enough and he will be looking to improve next season.

“It does not really matter who wins it, the most important thing is to try to build on what one has achieved this year, getting the nomination is already an achievement,” said Hlatswayo.
Meanwhile, Downs skipper Kekana believes the award could go either way.

“I really believe all three of us have represented our respective teams very well that is why we have been nominated for this award,” said Kekana, who helped Downs win the Caf Champions League.

Manyama guided City to the Telkom Knockout trophy in their maiden season and is the PSL’s top goal scorer with 13 goals to his name.

The midfielder has been consistent throughout the season and many believe the award will go to him.

However, he believes Hlatshwayo and Kekana also played huge roles for their teams.

“I just have to be confident that I will win the award, but at the same time, I have to give respect to the guys that I have been nominated with because they have also had a good season,” said the City star.

“It is really heart-warming to hear people say that I had a good season and deserve the award.”