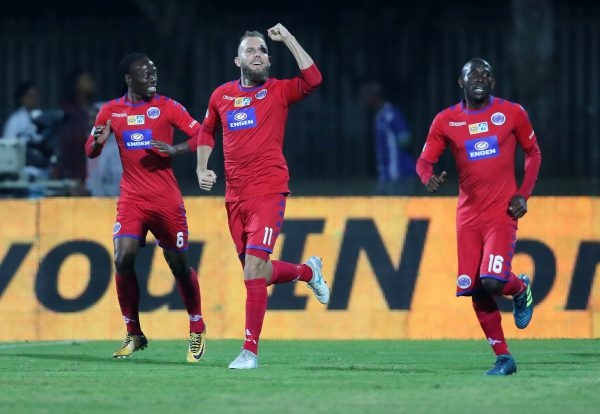 Brockie was reportedly unhappy at SuperSport United after his transfer request was turned down, but seems to have accepted it as he headed in two goals in the first half to help Matsatsantsa into the Wafa Wafa final.

“I put that issue to bed a long time ago and he has as well. He has been professional at training and showed a lot of maturity. He understands his opportunity to move will come. We know what his qualities are and he showed them tonight,” said Tinkler after his team’s 2-0 win which sent them through 3-1 on aggregate.

“It was a fantastic performance. We knew we had to score early to unsettle them. We also had to score a second to kill the match.

“We knew they would come at us in the second half and we managed our defence well.

“I wanted to get this team to this final and am happy we have managed to achieve that,” he said.

READ: Mosimane hits back at SuperSport

It is fair to say their experience came handy against a Maritzburg team dominated by youngsters, but Tinkler said it had to be matched with a good work ethic.

“You need to match experience with effort. We worked hard from the first whistle and deserved the win.”

Maritzburg’s Fadlu Davids who was on the cusp of making history by taking the team to their first final in his first full season as head coach accepted their fate.

“Maybe the occasion proved too big for a few of our players but we have surely learnt from this,” said Davids.