Bucks one loss away from relegation

Having clinched their spot in the Absa Premiership for next season last weekend, Highlands Park could send another team down to the ABC Motsepe League this weekend. 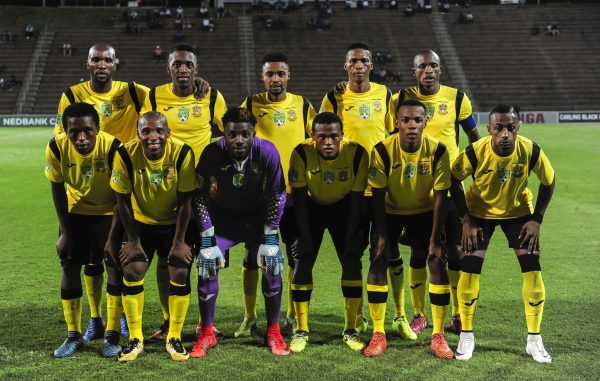 Mthatha Bucks are essentially sheep thrown into a lion’s den as they meet high flying Lions of the North at Makhulong Stadium in Tembisa this afternoon. Rooted to the bottom, Amathol’amnyama last won a National First Division match on January 27 while Owen Da Gama’s Lions of the North have not lost a match in 21 outings.

Highlands have meanwhile finished their race with a spot in the Absa Premiership now confirmed but Da Gama insisted that they will be professional and play their remaining fixtures with the same zest they have been since he took over in August.

“We have to be professional. We have Mthatha Bucks coming and we have to be as professional as possible. We can never say we have done enough,” said the former Bafana Bafana assistant coach.

If the Lions of the North are as free scoring as they have been on their last five matches where they scored 20 goals and beat Duncan Lechesa’s Bucks by a huge margin, the Eastern Cape based side’s path back to the amateur level would have been paved.

Bucks are already six points behind a team in a safe position and their goal difference doesn’t make for comforting reading for their fans.

University of Pretoria v CT All Stars, at Tuks Stadium, 3pm
Two sides who are essentially out of the race for a place in the play-offs because of recent bad results. They dotn have much to play for but this should still be an interesting match as coaches are likely to be experimenting and preparing for next season.

Highlands Park v Mthatha Bucks, at Makhulong Stadium, 3pm
A big win for Highlands will send Amathol’amnyama crashing into the amateur ranks. Bucks should throw everything they have at Highlands as they fight for survival.

Richards Bay v Super Eagles, at Umhlathuze Sports Complex, 3pm
The Rich Boys will look to ease their woes as they host fellow strugglers. With a point separating the sides, this should be a tough match for either side as a loss could have extensive consequences.

Uthongathi v Ubuntu CT, at Princess Magogo Stadium, 3pm
Uthongathi – who are 14th on the log – host Ubuntu and the winner in this match will get some reprieve but depending on other results.

Tshakhuma v Real Kings at Thohoyandou Stadium, 3pm
Tshakhuma’s chances of making the play-offs have been done a huge disservice as the team have not won in their last five matches while the magic Boys are still in with a chance. A win for Simo Dladla’s side could see them jump to second spot, depending on other results.

Mbombela United v Stellenbosch, at Kanyamazane Stadium, 3pm
Both have little chances of making anything of their campaigns now but they will still want to win in case teams above them drop points.

Royal Eagles v Jomo Cosmos, at Harry Gwala Stadium, 3pm
Both are desperate for points but for different reasons. Ezenkosi want to keep up with their peers in the race for a play-offs spot while Eagles want to climb away from the relegation positions.

Witbank Spurs v Black Leopards, at Puma Rugby Stadium, 3pm
The loser in this match may just as well kiss their play-offs chances goodbye, especially if it is the home side. Siyavutha will have to come out firing if they are ton stop Joel Masutha’s on form Lidoda Duvha.

'This is not on': Bafana coach Broos fires back at Mokwena
21 mins ago
21 mins ago

'This is not on': Bafana coach Broos fires back at Mokwena
21 mins ago
21 mins ago