TS Galaxy improved their GladAfrica Championship sitting after they recorded a 2-1 win over Swallows FC at Dobsonville Stadium on Wednesday afternoon. 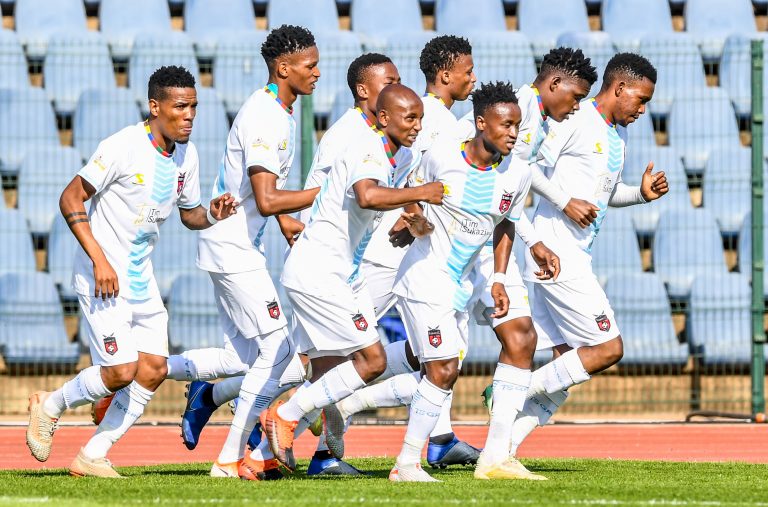 Bathusi Oubaas of TS Galaxy celebrates with teammates after scoring a goal during the GladAfrica Championship match between Swallows FC and TS Galaxy at Volkswagen Dobsonville Stadium on October 16, 2019 in Johannesburg, South Africa. (Photo by Sydney Seshibedi/Gallo Images)

Galaxy are now seventh with eight points after five games as they play catch-up in the league with their Caf Confederations forcing their games to be postponed.

The game got off to a bad start for the Dube Birds as they conceded an early goal through a free kick which Oubass Bathusi easily tucked in five minutes into the match. But five minutes later, the Beautiful Birds were level through Sipho Sibiya’s well taken header.

Swallows came close to taking the lead on 30 minutes but his header went just wide. The Rockets also threatened towards the end of the half but couldn’t find the right ball in the final third to make it count.

But 12 minutes into the second half the Rockets’ efforts were rewarded with Tshepo Chaine making an immediate impact, scoring just a minute after coming on.

Galaxy could have added one or two more goals but couldn’t properly execute their chances.

Swallows came close to getting an equaliser in the dying minutes and were generally unlucky to see their efforts going wide.