The win saw the Brazilians open the gap at the top of the DStv Premiership standings to three points. 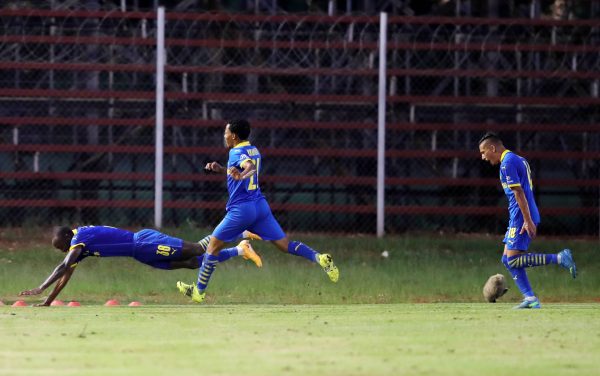 Peter Shalulile celebrates a goal with teammates during the DStv Premiership match between Black Leopards and Mamelodi Sundowns at Thohoyandou Stadium. (Samuel Shivambu/BackpagePix)

Wednesday evening’s DStv Premiership tie looked set to end in a draw but a 10-man Mamelodi Sundowns proved to be stubborn as they came back from a goal down to beat Black Leopards 2-1.

The win saw the Brazilians open the gap at the top of the DStv Premiership standings to three points.

The opening minutes of the first half belonged to the hosts as they found the back of the net through enterprising play. Sibusiso Khumalo was the man who delivered the assist to the on-form Ovidy Karuru.

Sibongiseni Mthethwa and Lefa Hlongwane had a head-on collision in the 50th minute when both players went for the same ball, resulting in a lengthy stoppage for about 10 minutes as both men received treatment on the field.

Mthethwa managed to get up but Hlongwane had to be transported off the pitch with an ambulance and taken to hospital.

Meanwhile, Masandawana used the opportunity to introduce Gaston Sirino who came on for Siphesihle Mkhize. The match eventually resumed and Leopards captain Rodney Ramagalela tried his luck from distance but could not get the better of goalkeeper Denis Onyango.

It took Sundowns about three minutes after the hour mark to find the equaliser and it was done in spectacular fashion by Peter Shalulile who scored an acrobatic goal for the first goal of his brace after he was found by Sirino in the box. Moments later, the visitors were dealt with a blow in personnel as they were reduced to 10-man.

Mothobi Mvala was shown a straight red card after referee Philangenkosi Khumalo did not hesitate to send the makeshift centre-back for an early shower as Mvala denied Ramagalela an obvious scoring opportunity when he tugged his shirt until he dispossessed him. As it has become common practice in the football world to substitute a midfielder or striker when you have lost a defender, Sundowns coaches did likewise and striker Kermit Erasmus was the sacrificial lamb as midfielder Andile Jali was sent on to fill the void.

Sirino had a chance to put his side in front when he was given acres of space by Lidoda Duvha’s defence and he had a free header, which looked set for the back of the net when it left his head, but Leopards goal-minder King Ndlovu refused to be beaten more than twice on the day.

Meanwhile, the match between Bloemfontein Celtic and Chippa United, which was scheduled to be played at Dr Molemela Stadium on Wednesday, was called off due to inclement weather.