Sundowns players and the technical team made the trip to the late Madisha’s family home in Zebediela to pay their respects to the former Bafana Bafana centre-back. 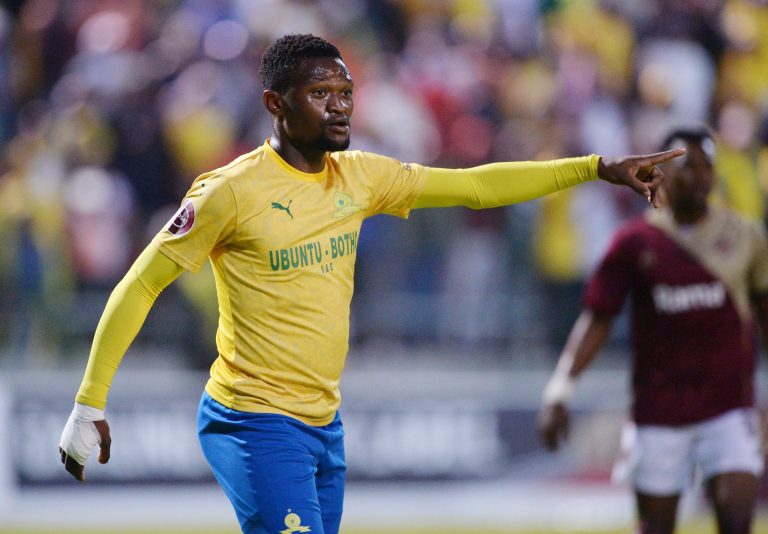 From his days as a youngster in the Mamelodi Sundowns academy, Motjeka Madisha was known as the “Ace” in the heart of the defence and all junior nation teams and Bafana, which he represented with pride and wore his heart on his sleeves.

He earned the nickname “Ace” because he was usually sharpest in the backline and he embodied all the qualities of a modern day centre back.

Of late, he went by the nickname “Ticket Esandleni”, coined by popular SuperSport TV commentator, Reginald “Mapensela” Ndlovu, who keeps viewers entertained with his witty IsiZulu commentary and ability to come up with catchy nicknames such as that of “Ticket Esandleni”, which loosely suggests that you need to have a ticket in hand before passing Madisha at defence, just as required when boarding a flight, train or bus.

Sundowns players and the technical team made the trip to the late Madisha’s family home in Zebediela to pay their respects to the former Bafana Bafana centre-back took his last breath in December last year and will be laid to rest this coming Saturday.

His teammate, Mosa Lebusa, who partnered with him as the rare guard of Masandawana, described Madisha as someone who was always ready to get under the skin of his teammates, as that was part of his love language, Lebusa suggests.

“We are heartbroken. As for his family, I can only imagine what they are going through. We also lost a player, a brother and a friend. It is not easy. Hopefully we will get over it and he will forever be in our hearts,” said Lebusa.

“There is a lot I will remember about him and the memories that we shared were really special. I will always think of him as person who was never sad, he always had a smile on his face. He was too playful and what I like about him is that as playful and as irritating as he was, whenever it is time to play a match he would give you 120%, no doubt about that he was going to excel.

“We used to fight. Not physical fights but sometimes I felt he was irritating me but at the end of the day it was just him showing that he cares about you and I never really took anything personal. May your soul rest in peace until we meet again,” Lebusa added.

Meanwhile, Kermit Erasmus, who recently joined the side, revealed how much he believed in Madisha’s aerial ability, to the point that he would always try to make sure he is not tightly marked during set-pieces.

“He was really humble, he was always smiling and always joking around, especially when a player got the ball through the legs, even if it was in the match, whether it’s his player or the opposition. He was a very fun person to be around and he was a sportive person.

“In the short time I got to be his teammate, it was quick interesting because I was known for blocking his player when we would have attacking corners to free him up to try and score. It was the kind of bond that we created together because as soon as I knew that he was free he’d stand a good chance to score because he is good aerially.

“We just want to give our support in the family and let them know they are not alone in this, we are also going through what they are going through and we are feeling the pain, we hope that things can get better and we know God is with them,” said Erasmus.

Phakaaathi would like to convey our condolences to the Madisha family, Sundowns and entire football fraternity.

May his soul rest in peace.