Amakhosi will now play Wydad Athletic in the previously postponed fixture in Burkina Faso on Sunday. 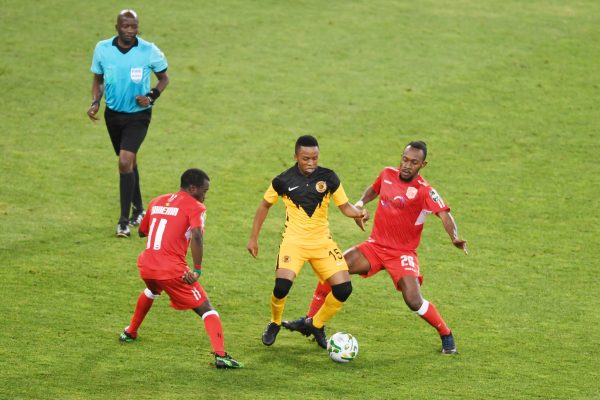 It was the same old story for Kaizer Chiefs as they couldn’t utilise their chances and played to a goalless draw with Horoya AC in their first Caf Champions League Group C match at FNB Stadium on Tuesday night.

Amakhosi had a dominant start, but couldn’t create clear scoring chances. But Samir Nurkovic came close to opening the scoring 27 minutes into the match but failed to guide his header towards goal.

Horoya also had some threatening attacking maneuvers and were closest to putting Amakhosi in trouble in the 31st minute but Dramani Agyei’s cheeky chip went over Itumeleng Khune’s goals.

Amakhosi looked to have scored early in the second half with Nurkovic getting his header into the net in the 47th minute but he was rule to have been offside. TV replays however showed the assistant referee might have gotten it wrong.

Four minutes later, Nurkovic had the ball in the net again, but he was again ruled offside.

Amakhosi continued looking for the goal, but just couldn’t find the right balls in front of the visitor’s goals.

As the game wore on, Horoya realised they could steal the three points and started being adventurous in their display, trying to catch Chiefs with a counter attack.

And it almost paid dividends in the 77th minute but Siyabonga Ngezana jumped in front of the Horoya striker just on time to clear the dangerous ball away.

With five minutes to the end, Amakhosi came close finding the winner but Ngezana’s shot hit the post, and rolled away to safety.

Khune was called into making a reflexive save in the 90th minute as Horoya went for the kill in the last minutes of the game.

Moussa Camara was forced into a match saving stop at the other end as second half substitute, Lebogang Manyama tried to beat him with a stinging shot from a free kick.

In the other Group C match played earlier on the day, Wydad Athletic beat Petro De Luanda 1-0 and are now second and one point behind Horoya. The Guinean side, however, has played a game more than the Moroccan side.

Amakhosi will now play Wydad Athletic in the previously postponed fixture in Burkina Faso on Sunday.