'You run out of superlatives, this guy is charged like a Duracell,' said the Sundowns co-head coach. 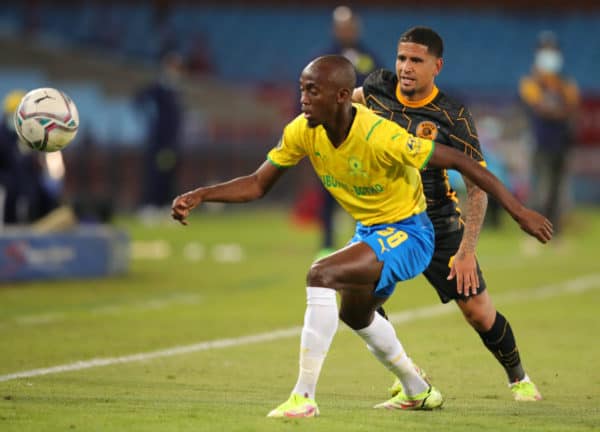 Rulani Mokwena described Peter Shalulile (right) as like a Duracell battery after the Sundowns striker came back from international duty, and immediately got himself on the scoresheet for Masandawana in their 2-0 DStv Premiership defeat of Kaizer Chiefs on Sunday.

The Namibian lasted 84 minutes, after returning from a long trip to Togo with his national team, and was the right man in the right place to slot in Neo Maema’s cross in the 63rd minute at Loftus Stadium. Shalulile has started all of Sundowns’ league and cup games so far this season, and the Sundowns co-head coach showered praise on his 27 year-old star striker.

“You run out of superlatives, this guy is charged like a Duracell,” said Mokwena.

“Peter is a team player, he sacrifices himself and puts himself on the line for the team. We always say that as long as he gives his service to Mamelodi Sundowns, everything else will fall into place. We trust him like we do every one of our players. We know he will not just give us goals and assists, he adds a lot more, his movement creates space, he pulls defenders, he can do a high press.

“I think the best thing is to find the most expensive cotton wool to wrap him in,” added Mokwena.

“He continues to run and run, at training at times we are working on pressing and he tries to press everyone. We have to say to him ‘Peter, these are the players you must press.'”

Mokwena was also delighted with the performance of new signing Grant Kekana, who played well alongside Ruhsine De Reuck in the heart of the Sundowns defence and also scored his first goal for Masandawana, heading in Sundowns’ opener in the 8th minute.

Kekana has got his chance early this season in the Sundowns back four, with Mosa Lebusa and Ricardo Nascimento both out injured.

“Grant comes from a good family background. This might seem to have little to do with football performance but these are things we look at,” said Mokwena.

“Part of recruiting players is profiling and extensive work behind the scene. Grant’s mother (Pinky Kekana) is a deputy minister in government. You can see how he carries himself in the changeroom and how he is trying to get the best performances out of himself and his teammates. He is selfless and works extremely hard for the team.

“His progress has been a bit accelerated because of injuries, but he has run with it. We are a meritocracy, we give chances to people who show intensity in their performances.”